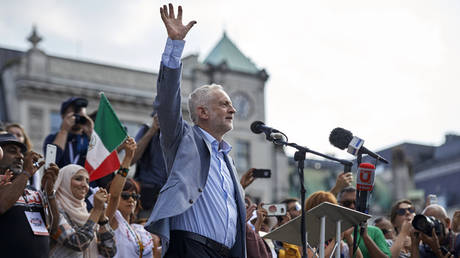 Leader of the opposition Labour Party, Jeremy Corbyn, has publicly opposed UK’s possible extradition of WikiLeaks editor Julian Assange to the US, saying he exposed evidence of atrocities in Iraq and Afghanistan.

Hours following Assange’s arrest in London on Thursday, Corbyn tweeted a video statement of Labour MP Diane Abbott, who argued in Parliament that WikiLeaks had “lifted the veil on US military operations in a variety of theaters, none of which have produced a favourable outcome for the people of those countries.”

The extradition of Julian Assange to the US for exposing evidence of atrocities in Iraq and Afghanistan should be opposed by the British government.pic.twitter.com/CxTUrOfkHt

“Julian Assange is not being pursued to protect US national security, he is being pursued because he has exposed wrongdoing by US administrations and their military forces,” said Abbott.

The US has charged Assange with “conspiracy to commit computer intrusion,” over the 2010 publication of classified US documents provided to WikiLeaks by US Army whistleblower Chelsea Manning.

Fearing extradition to the US on spurious charges raised against him in Sweden, Assange sought refuge in the Ecuadorian Embassy in London in 2012. He remained inside the embassy for almost seven years, with the UK denying him passage out, until his asylum was revoked by Ecuadorian President Lenin Moreno.

Also on rt.com
Bolivian president condemns ‘persecution of Assange over US’ murders & spying’