Labour leader Jeremy Corbyn has slammed hardline Brexiteers Jacob Rees-Mogg and John Redwood during PMQs, for making Brexit “their life’s work” despite worrying about their “own financial interests,” in a post-Brexit UK.

During a tempestuous PMQs, the Labour leader hammered Rees-Mogg for relocating his hedge fund company to Dublin, Ireland, a country in the EU and part of the Eurozone single currency. This move has come as a surprise to many considering the Tory MP for Somerset has been on record as saying that a no-deal scenario should not be ruled out with regards to the Brexit negotiations.

Corbyn, singling out hardline Brexiteers, remarked: “Mr Speaker it’s very interesting that even those Brexiteers who have made Brexit their life’s work are concerned about their own financial interests. 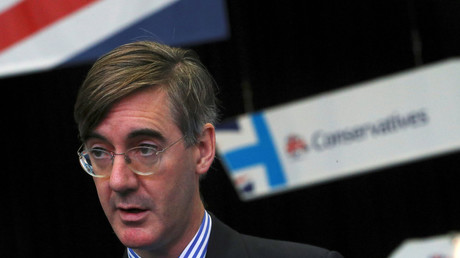 “The honorable member for north-east Somerset [Jacob Rees-Mogg], for example, is relocating his hedge fund to the Eurozone,” he added.

Rees-Mogg has recently defended his London-based firm, Somerset Capital Management (SCM), of which he is the co-founder and non-executive chairman as well as a partner in the business, moving to Dublin, reports the Telegraph.

He has also said the warnings given by his company in relation to Brexit risks were “not a policy statement by SCM” but guidance to investors which had been drafted by lawyers.

The outspoken Tory backbencher, shook his head sheepishly as Corbyn picked him out for criticism on his pre-Brexit business moves.

After referencing Rees-Mogg, Corbyn then highlighted the apparent hypocrisy of fellow Tory Brexiteer, John Redwood, for recommending that investors in his company, Charles Stanley, should “look further afield” because of the state of the British economy.

“The honorable member for Wokingham [John Redwood] is advising his clients to dis-invest in Britain. Meanwhile in the real world Andrew, who works for Honda in Swindon, wrote to me and said… [interrupted by heckling from the Tory benches].”

Corbyn told the boisterous Tory benches, who interrupted his speech: “I wouldn’t laugh if I was you. These are real people with real jobs and real concerns.”

Conservative MP Redwood, who has a £180,000 second job as chief global strategist for the investment management firm, wrote in his Financial Times column last year that the European Central Bank was encouraging faster growth when Britain was experiencing a squeeze on credit.

“Mario Draghi, ECB president, is now doing whatever it takes, not just to rescue the euro but to promote a much-needed economic recovery,” he wrote.

It came after the opposition leader had began his series of questions for Prime Minister Theresa May by asking whether she agreed with Foreign Secretary Boris Johnson’s attitude towards business when he reportedly told diplomats “f**k business” when it came to their concerns over Brexit.

“On Brexit Mr Speaker the Business Secretary [Greg Clark] believes business is entitled to be listened to with respect. I’m sorry to see the Foreign Secretary is not here today with us.”

Adding: “He takes a very different view using an Anglo-Saxon term to make his point.”

May insisted that her Conservative party would always support business. “This party and this government has always been a party that will back business and will continue to back business,” she said.

Corbyn finished by laying into May’s handling of Brexit, claiming she was risking British jobs, but unfortunately not the jobs of her warring Cabinet.

“She is putting jobs at risk. Sadly it’s not those of the warring egos in her Cabinet because they’ve now been rewarded with an invite to a pyjama party at Chequers.”