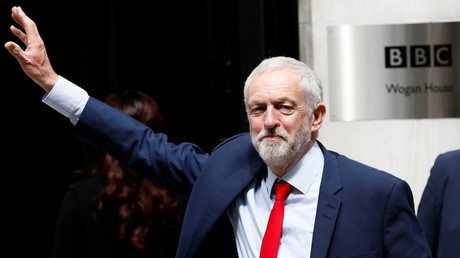 The BBC has been exposed by startling statistics showing a consistent bias against left-wing political opinion, despite their stated commitment to ‘impartiality’, according to figures compiled by a key Corbyn ally.

Alex Nunns, author of ‘The Candidate: Jeremy Corbyn’s Improbable Path to Power’ and prominent supporter of the Labour leader, has collated figures on the political persuasions of expert journalists who have appeared on the BBC’s Sunday Politics Show.

Nunns has calculated that since the 2017 general election, only 10 percent of journalists to have made an appearance on the panel of three ‘experts’ have been from the left, 33 percent from the center (encompassing the center-left), and a whopping 56 percent from the right.

For a year since the general election I’ve done a thread recording the guests on BBC Sunday Politics’ panel of experts (https://t.co/i5dRZNZMA7). Just 10% of the guests have been from the left, 33% from the centre (encompassing the centre-left), but over half—56%—from the right.

I’m not saying the BBC’s choice of political commentators is hopelessly biased against the Left… it just happens to be the truth.

Wouldn’t it be amazing if someone turned @alexnunns legendary thread on Sunday Politics panel bias into a video?

Nunns revealed that within the top five most frequently appearing guests on the Sunday Politics Show, not one journalist was from the left. The Rupert Murdoch-owned Sun’s right-wing political editor, Tom Newton Dunn, seems to be a particular favorite of ex-Sunday Times editor and main Sunday Politics presenter Andrew Neil, a Murdoch employee, topping the list with 19 appearances over the course of a year.

The Independent’s center-left Steve Richards is close behind with 18, and Isabel Oakshott – the right-wing journalist who gave us ‘Piggate’ with her co-authored unauthorized biography of former PM David Cameron, ‘Call Me Dave’ – is third with 12 appearances. The Guardian’s Rachel Shabi and Zoe Williams made three guest appearances – the most of any left-wing journalists.

The top 5 most frequently appearing guests were:

(The most frequent left guests were Rachel Shabi & Zoe Williams, with 3 each.)

Nunns claims that there was no ‘left’ voice on 69 percent of the episodes, calculating that 25 out of 36 shows didn’t feature a guest from the left on the panel. Nunns defines the ‘left’ “as somewhere near the position currently occupied by Labour, which commanded 40 percent of the vote.”

On 25 out of 36 shows the panel didn’t feature a guest from the left (defined as somewhere near the position currently occupied by Labour, which commanded 40% of the vote). That means the left was unrepresented on 69% of episodes.

The BBC has been accused by left-wing political commentators of failing to recognize or understand the changing political landscape that has developed since the surprise 2017 general election result that saw Corbyn’s Labour gain the biggest share of the vote since 1945 – when many in the mainstream media had predicted a Conservative landslide.

Official BBC editorial guidelines on impartiality say: “Impartiality lies at the heart of public service and is the core of the BBC’s commitment to its audiences.” A key principle stated within the BBC impartiality guidelines is that they are“committed to reflecting a wide range of opinion” and claim “no significant strand of thought is knowingly unreflected or under-represented.”

Supporters of Jeremy Corbyn, such as Nunns, questioned the validity of such avowed principles given the author’s research, when Sunday Politics viewers have had a 7 in 10 chance of two of the guest panelists being from the right.

So if you watched Sunday Politics over the last year, there was a 7 in 10 chance that of a panel of 3 pundits, 2 would be from the right. And we’re not talking about the thinking, reflective right, we’re talking about the likes of Isabel Oakeshott & Julia Hartley-Brewer.

A beautifully presented view of BBC Sunday Politics’ ‘balance’. The statement at the end could be construed as an error at best, at worst, it might be seen as a lie. I think we have to have a response. Please RT. @BBCPolitics

I’ll second JTBs comment and add an observation that Oakshott and Hartley-Brewer seem to occur a lot.
Do they work cheap or live next to the studio?

To quote Trump…
Biased, so biased, it’s all fake news.

Three cheers for the BBC.
Two far right cheers and a centrist one of course.

Nunns’ findings come as the BBC Radio 4 Today program hosted by John Humphreys has come under fire for its coverage of Brexit. Guardian contributor Alex Andreou accused it of simply echoing Daily Mail rhetoric, with Humphreys’ “toxic editorializing” in reference to migrants coming to the UK – a point highlighted by others on Twitter.

Just realised that listening to #r4today is like having breakfast with a ghastly relative who persists in reading lengthy extracts from the Telegraph and Mail to you, shouts you down if you question his views, and then wants you to do an incomprehensible puzzle

#r4today How did this programme go from an hugely respected, essential source of news and investigative journalism to a dire propaganda outlet for the Tory/Neoliberal Establishment?

While the issue of political bias is a subjective matter and extremely difficult to drill down with accurate data, Nunns’ research on the BBC’s Sunday Politics has shed some light on a tricky subject for all news broadcasters – where balance is the outward objective, yet rarely achieved in practice.