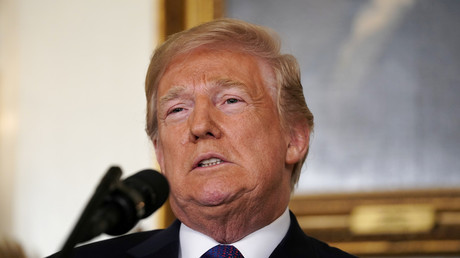 In the wake of US-led airstrikes against Syria following an alleged chemical weapons attack in Douma, many of US President Donald Trump’s most ardent supporters have vehemently criticized the action.

Conservative writers, bloggers and newscasters that have long stood by Trump are abandoning the president in the wake of his latest intervention in Syria for breaking one of his main campaign promises: to refrain from meddling in the Middle East. Many have even retweeted several of Trump’s own criticisms of past administrations’ actions in the Middle East as a reminder of just how galling these latest strikes are to many in his support base.

The President must get Congressional approval before attacking Syria-big mistake if he does not!

AGAIN, TO OUR VERY FOOLISH LEADER, DO NOT ATTACK SYRIA – IF YOU DO MANY VERY BAD THINGS WILL HAPPEN & FROM THAT FIGHT THE U.S. GETS NOTHING!

While many of his supporters voiced their criticism of Trump’s ‘one-and-done’ strike against a Syrian airfield in April 2017, others saw it as a token gesture to appease the international community in the wake of an alleged chemical weapons attack carried out by pro-Assad forces. US Defense Secretary Jim Mattis admitted in early February that the US had yet to find evidence to justify the 2017 cruise missile strikes.

Conservative firebrand and Fox News host Tomi Lahren, a vocal supporter of Trump since his election, decried the return to US foreign intervention that became the hallmark of both the Bush and Obama presidencies.

Americans should not die fighting a war that’s NOT OURS TO FIGHT. #syria

Whelp. So much for no more stupid wars.

Trump just announced that along with the U.K. and France, the US will be conducting air strikes in #Syria.

Holy motherfucking shit. McCain and the swamp media agreeing with Trump… now Lieu agreeing with Alex Jones? Did those missiles launch us into some kind of alternate reality? https://t.co/oAQJAh4LRj

Lahren’s Fox News counterpart and equally outspoken political commentator Laura Ingraham suggested that the US “should rethink how we deploy our forces Middle East.”

“It is interesting, the president’s elected over a year ago, he ran on being a non-interventionist… And that’s one of the reasons Trump won this election. Because unlike the Bushes and unlike Romney and Rubio, Trump came out and said, ‘You know something? It was a mistake, and we should rethink how we deploy our forces Middle East.’ And I think, obviously a lot of people, a majority of people, agree with that.”

Outspoken political commentator Alex Jones appeared distraught while presenting news of the strikes to his audience during a marathon broadcast on the subject. And Jones was far from alone in resorting to swearing to emphasize distaste for a foreign policy more akin to Trump’s former presidential campaign rivals than the promises he himself made in 2016.

Now ISIS soldiers are moving in and killing Christians.

One of the last sanctuaries for Christians in the Middle East now bombed by a supposedly-Christian nation – which also sells immense high-tech weaponry to Islamic Saudi theocrats.

Others warned that the US had endangered Christian populations in Syria. In addition, several formerly ardent Trump supporters added that the actions could also embolden beleaguered Islamic State militants, who have been pushed to the brink of defeat across both Syria and Iraq.

I’ve said it before and I’ll say it again. Our track record of intervening in Syria and the Middle East is terrible.

Attacking a foreign nation that has not attacked or threatened America is globalist interventionism.

This is not ‘America First’. This is not what Trump was elected for.https://t.co/fPdJlIQaYz

Even Trump’s foreign allies and supporters have excoriated the US president’s decision to strike the Syrian military and further escalate tensions in the region just days after Trump stated that a withdrawal of US troops was imminent. Most notable among them was former UKIP leader Nigel Farage.

First of all, you’re not an American. Second of all, America didn’t elect Trump to meet your narrow agenda but to lead with boldness, instinct and intuition.

Most of all, we didn’t elect him to ask YOUR permission before he acts. https://t.co/uxStSGZYxV

Assad is an animal.

War is a horrible horrible thing, but if not America, then who else will prevent evil dictators like him from using these weapons against civilians?

However, not everyone has abandoned Trump. His more fervent supporters have claimed that the US fulfils a role that no other nation can, while others have attacked his critics, advocating for the unilateral action even in the absence of congressional approval.