Commons Speaker John Bercow is facing fresh calls to resign after it emerged he has a “******* to Brexit” sticker emblazoned on his car. Pictures show the message stuck on the windscreen of his 4×4 vehicle

The Commons Speaker, who previously admitted to voting Remain during the 2016 EU referendum, has been accused of “blatant arrogance” over the anti-Brexit message stamped on his car, which was spotted in his private parking space outside parliament on Tuesday. It is unclear whether his wife also uses the car. The Speaker’s Office said it would not be commenting on the sticker.

Tory MP Andrew Bridgen MP lashed out at the Speaker for breaching his role of impartiality as he repeatedly reiterated support for the UK to stay in the EU. Bridgen told the Telegraph: “The Speaker has never made any attempt to hide his views on Brexit.” 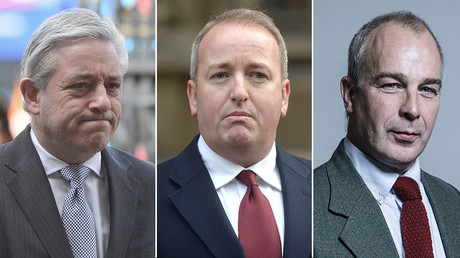 Bridgen’s Tory backbench colleague, MP James Duddridge, also lashed out at the Speaker’s supposed breach of duty, stating it is “unthinkable” that Bercow should continue mediating Brexit debates, as he is blatantly trying to “derail” discussions.

“He is a tone-deaf speaker sitting in his ivory tower. He can no longer be an independent arbitrator in debates on such a crucial subject,” Duddridge said, according to the Daily Mail.

He went on to claim Bercow had crossed the boundaries. “The Speaker is just not toeing the line. He is leaping across it.”

“Having views on Brexit, conducting himself as if he is the Foreign Secretary, banning people from parliament. It is not his parliament. Time after time he oversteps the mark.”

Bercow’s statement comes after he faced calls to resign after he insisted on chairing a debate over a bullying row in parliament – despite facing his own misconduct allegations.

READ MORE: ‘Out of order’: SNP MP rebuked in Commons for saying Tories are ‘bought’

Bridgen suggested on Monday that he or another MP would put down an early day motion (EDM) expressing no confidence in the speaker. The MP later said he would drop his intentions for a no-confidence vote, but insisted that there are grounds for an investigation into allegations against Bercow. Commons Leader Andrea Leadsom has ordered an independent inquiry into bullying allegations from parliamentary staff against certain MPs and the Speaker.