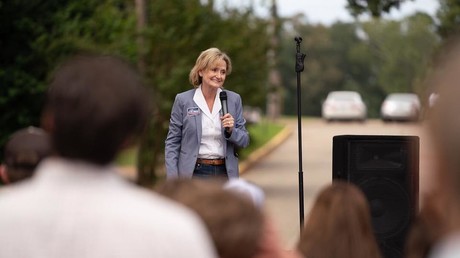 Mississippi Republican Cindy Hyde-Smith, who is facing a runoff Senate election against an African-American Democrat, has found herself in hot water after joking that she would sit in “the front row” at a public hanging.

A video tweeted by journalist Lamar White Jr. of the Bayou Brief shows Hyde-Smith standing alongside a supporter at a campaign event in Tupelo, where she was speaking to a small gathering of people. Referring to the supporter, the Republican senator says that if he “invited me to a public hanging, I’d be on the front row.”

“If he invited me to a public hanging, I’d be on the front row”- Sen. Cindy Hyde-Smith says in Tupelo, MS after Colin Hutchinson, cattle rancher, praises her.

Hyde-Smith is in a runoff on Nov 27th against Mike Espy. pic.twitter.com/0a9jOEjokr

Jokes about public hangings don’t tend to go down very well in Mississippi, though, given its grim history. There were 654 racially-motivated lynchings in the southern state between 1877 to 1950 — more than in any other US state.

Mississippi Senator Cindy Hyde-Smith said recently she’d be “in the front row” of “a public hanging.” She’s now in a runoff election on Nov. 27 against Mike Espy, a black man.

This is what it looked like when white people stood in the front rows of public hangings in the past. pic.twitter.com/zIgaI1LH4R

The comment was arguably more problematic given that Hyde-Smith’s opponent Mike Espy is the first African-American to win a Mississippi seat in the US House of Representatives since Reconstruction — and would be the first black person to represent the state in the US Senate, if he beats Hyde-Smith.

Many on social media immediately seized upon the comment as “racist” and insensitive “dog whistle” politics. Espy’s campaign called the remark “reprehensible” and said it indicated that she “lacks the understanding and judgement” necessary to represent the state.

Explaining her remark, Hyde-Smith said it was simply “an exaggerated expression of regard” for her supporter and that “any attempt to turn this into a negative connotation is ridiculous.”

Other Twitter users pointed out that Hyde-Smith’s home town of Brookhaven was the scene of multiple lynchings throughout its history and suggested that invitations to public hangings were “probably” something that the senator’s grandparents were “familiar” with.

Cindy Hyde-Smith was born in Brookhaven, MS, a town she later represented in the state Senate. The last “public hanging” there was in 1928. A mob dragged brothers Stanley and James Bearden, two black men, from the county jail…

Invitations to public hangings are probably something Sen. Hyde-Smith’s grandparents were familiar with. Her hometown of Brookhaven MS was the scene of multiple lynchings, which her grandparents were certainly aware of & probably knew the perpetrators of.

In 1928, two black men, Stanley and James Bearden, were pulled out of the Brookhaven jail, dragged behind a car for 2 miles, then hanged. Hyde-Smith’s grandparents, Henry & Isabel (King) Hyde, were 38 and 23 at the time, living in Monticello.

Derrick Johnson, the head of the National Association for the Advancement of Colored People (NAACP) who is from Mississippi himself, said that the senator’s decision to joke about public hangings “in a state known for its violent and terroristic history” toward African-Americans was “sick” and “shameful.”

On Twitter, Johnson later said that Hyde-Smith’s response to the controversy was “tone deaf and demonstrates disregard” for the state’s history.

Hyde-Smith has held Mississippi’s junior senate seat since April, after she was appointed to replace Thad Cochran, who resigned due to illness. Both she and Espy received 41 percent of the vote in the midterm election last week, but since neither candidate reached the required 50 percent, they will now face each other in a runoff election, due to be held on November 27.

The public hanging comments came just days after a nurse (and former police officer) was fired after being photographed wearing a ‘Mississippi Justice’ t-shirt featuring a Confederate flag and a noose to his polling place.