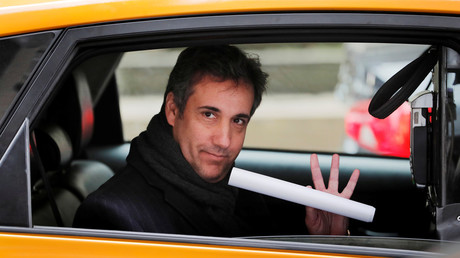 A bombshell story that was supposed to be the end of President Donald Trump – until the celebrity source recanted. It sounds like a typical media screw-up, with one key difference: for whatever reason, CNN is standing by it.

On July 26, CNN reported that Michael Cohen, Trump’s former personal attorney, claimed that Trump “knew in advance about the June 2016 meeting in Trump Tower in which Russians were expected to offer his campaign dirt on Hillary Clinton,” and was willing to testify to that effect to special counsel Robert Mueller, according to “sources with knowledge.”

Trump denied the story the very next morning, tweeting “so the Fake News doesn’t waste my time with dumb questions,” and calling out Cohen for hiring Lanny Davis, “Bill and Crooked Hillary’s lawyer.”

Fast-forward a month, after Cohen pleaded guilty to a litany of felonies, and Davis has admitted that Cohen said no such thing, “does not” know about the Trump Tower meeting, and obviously won’t testify to Mueller about it. CNN’s reporting got it “mixed up,” he said. As a result, other outlets that relied on Davis as a source have retracted their Trump Tower stories. CNN, though, is standing by theirs.

CNN has painted itself into a tiny, twisted corner. Is there anyone who doubts that this sentence in its “blockbuster” story was flat out false? If it’s not false, how they can refuse to explain it? Are we fine with major media deceit if it’s in service of a particular agenda? pic.twitter.com/PEQX0gfV0j

Journalist Glenn Greenwald speculates it’s because the original story explicitly stated that CNN had contacted Davis but he “declined to comment.” Trouble is, Davis told BuzzFeed that he was CNN’s source for the story. So either CNN is lying to its audience about Davis, or Davis is lying about being a source for CNN, Greenwald pointed out.

“If CNN lied about Davis having refused comment (when, in fact, he was one of their anonymous sources), then this is obviously a major journalism scandal,” Greenwald wrote in The Intercept on Tuesday. If Davis is lying, “that is also a major story,” given that US media have treated him as a reliable source for decades, and that Davis has used his media platform to promote a Michael Cohen “truth fund,” a crowdfunding campaign for money that will actually go to pay Davis through legal fees.

In sum: everyone knows CNN – in what it touted as a “blockbuster” story, one of the biggest yet in the Trump/Russia saga – almost certainly told a major, purposeful lie which they refuse to acknowledge. But like Joy Reid’s hacker, it’s fine because it was for the right reasons.

Caught in such contradictions, media outlets typically claim their errors are “just good faith and rare mistakes,” being exaggerated by their critics, writes Greenwald. However, he says, major US media have “repeatedly and frequently – not rarely and periodically – gotten major stories completely wrong, always in the same direction” when it comes to Trump and Russia.

Their errors have been “chronic,” “systematic” and “reckless,” including stories from Russian hacking of the Vermont power grid that never happened to a supposed links between Trump ally Anthony Scaramucci and a Russian bank. It is worth noting that CNN actually retracted that story and fired the people involved – a rare case of someone being held accountable for this kind of Trump/Russia fake news.