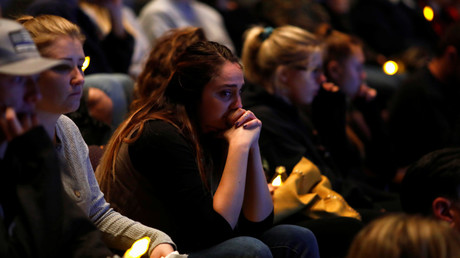 “You think leaving it to God is the answer?” asked CNN’s Chris Cuomo in a segment on the latest mass shooting in the US, suggesting that something would be done for gun control if children of influential people were to be shot.

One day after former Marine Ian David Long unloaded on a packed bar in Thousand Oaks, California, Cuomo launched into a passionate gun-control diatribe, lambasting pro-gun politicians and lobbyists like the National Rifle Association for failing to take real steps towards stopping “the damn shooting.”

Cuomo then savaged the familiar line trotted out after every incident of mass gun violence in the US: “I would like to offer my thoughts and prayers.”

Thoughts and prayers, Cuomo argued, “mock those who lost loved ones, because if you gave it any thought, you would never walk away from any of these without figuring out a better way to deal with them.”

“Prayer?” he continued, “You think leaving it to God is the answer?

“How about a stadium full of children of the most influential people in our society, all holding puppies. What if they were all shot and killed. Would we act?

Where Is Your God Now?!

Cuomo has shown repeatedly that he’s willing to attack God and pretend he’s ignorant on religions (when he almost certainly isn’t) to make a political point. https://t.co/URFdbQQ2HI

My prayers are between God and me. And I remain unconcerned what Chris Cuomo or any other man of God’s green earth thinks about them. https://t.co/0CEv8EOccv

Thoughts and prayers for the victims in London today. I wonder when the Muslim Mayor of London will wake up to the threat of Radical Islam? https://t.co/t24tJ5J36P

ISIS now celebrating attack in Nice. “Thoughts and prayers” for victims are not enough. Time for leadership to combat radical Islam.

Whatever his opinions on prayer, God, or shooting puppies, Cuomo’s point is a solid one. ‘Thoughts and prayers’ are a staple of American public discourse every time tragedy strikes. With over 300 mass shootings – defined as a shooting in which more than three people are killed or injured, from gunshots or while escaping – this year so far, many feel frustrated upon hearing the same platitudes and partisan bickering every time, while nothing changes.