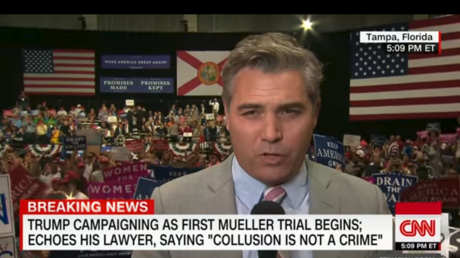 CNN’s White House correspondent Jim Acosta felt the wrath of the Tampa crowd when he was doing a live shot from a pro-Trump rally on Tuesday. Acosta was heckled with his stand-up almost drowning in chants of “CNN sucks.”

The CNN reporter, known for shouting questions at the US president and being denied answers, was in Tampa to cover the massive ‘Make America Great Again’ rally there. Delivering on his pledge to “campaign six or seven days a week” for Republicans ahead of the midterm elections, Trump was trying to drum up support for Rep. Ron DeSantis (R-Fla) in the race for Florida governor.

Videos captured Acosta near-surrounded by agitated Trump supporters, whose chants of “CNN sucks” and “traitor” almost drowned out the CNN broadcast. At one point, Acosta appears to address the crowd, but his words cannot be heard over continuing heckling and loud booing.

After the video of his botched live coverage attempt took off on Twitter, the commentators were mostly partisan.

Some, like controversial columnist and TV personality Katie Hopkins, applauded “Team Trump” for “excellent work” at the rally.

Members of anti-Trump #Resistance have sprung to Acosta’s defense, slamming the crowd “so angry at CNN and Jim Acosta they were practically foaming at the mouth.”

The crowd at the Tampa rally was so angry at CNN and Jim Acosta that they were practically foaming at the mouth.

Trump continuing to escalate hatred for the press after the Capital-Gazette shooting is sick and twisted.

Commenting on the incident, Acosta claimed that he almost bonded with the pro-Trump demonstrators upon the end of the broadcast. Saying that “it was great chatting with all the Trump supporters in Tampa tonight,” he still managed to take a dig at Trump, adding “I took more questions from them than the president has taken from the press lately.”

It was great chatting with all the Trump supporters in Tampa tonight. I took more questions from them than the president has taken from the press lately.

By reaching out to Trump’s grassroots supporters, Acosta even has scored some points with fellow media professionals from a Fox affiliate.

Trump supporters can boo and say forever that they hate CNN and @acosta but after the cameras are off, all I see is them asking his opinion on everything under the sun and if they can take pictures with him. It’s quite a phenomenon. And he handles it like a pro.

It’s far from the first time Acosta faces off with Trump fans or the President himself.

In June, he got about the same treatment at a Trump rally in Columbia, South Carolina. The crowd yelled “Go home Jim” and “fake news” as Acosta was waiting for the President’s arrival to a press area.

Last month, Trump snubbed Acosta at his joint press conference with UK PM Theresa May, denying him a question and going on another rant against “fake news” CNN.

Trump has repeatedly bashed CNN as “fake news” amid his ongoing war with the liberal-leaning media, also calling the New York Times “failing” and BuzzFeed a “pile of garbage.”