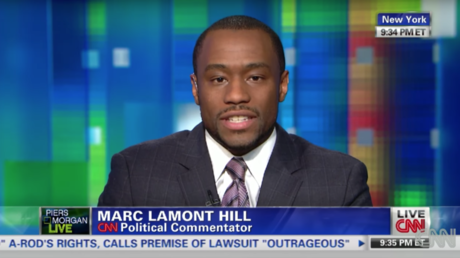 Academic Marc Lamont Hill lost his contract as a CNN contributor after a speech about Israel and Palestine that critics called anti-Semitic. His firing quickly turned into a battleground in the ongoing US political culture war

Hill teaches at Temple University in Philadelphia, Pennsylvania and has been a frequent on-air contributor for CNN – until Thursday, when the network dropped his contract like a hot potato without further comment, following the outrage over a speech he gave.

Speaking at the UN on Wednesday, Hill accused Israel of “ethnic cleansing” and denying due process to Palestinians, calling for a “a Free Palestine from the River to the Sea,” meaning the Jordan to the Mediterranean.

That particular phrase is anti-Semitic, the Anti-Defamation League (ADL) fired back. “Those calling for ‘from the river to the sea’ are calling for an end to the State of Israel,” Sharon Nazarian, ADL’s senior VP for international affairs, told the Jewish Journal.

“Marc Lamont Hill is no longer under contract with CNN,” the network said on Thursday afternoon, without further explanation. Battle lines were quickly drawn over Hill’s termination, with CNN finding itself in the crossfire.

Outraged to hear that @CNN fired Marc Lamont Hill for advocating for Palestinian rights in a speech to the UN. Calling for Palestinians to have equal rights in their ancestral lands is NOT racism or anti-Semitism. Shame on Israel’s speech suppression lobbyists and shame on CNN! https://t.co/bFCGte2lJ7

CNN fired its only good commentator, Marc Lamont Hill, because he criticized Israel’s violations of international law and called for “a single secular democratic state for everyone”

Rick Santorum said climate change is a hoax and scientists are bought off by big government grant money on @CNN like last week and he still has a job. Marc Lamont Hill mildly criticizes Israel and he’s fired immediately.

CONFIRMED: CNN has cowardly and pitifully fired @marclamonthill for the crime of advocating equal political rights for Palestinians. I’m sure all of the people on the right who object when media outlets fire people for expressing controversial views will join me in defending him.

Those who agreed with the ADL said that CNN should have denounced Hill and his statements openly, and that a network that just aired a special on the rise of anti-Semitism was actively contributing to it.

Even in firing Marc Lamont Hill, @CNN deliberately refuses to condemn what he said about Jews and Israel and explain why it was so heinous. Shameful cowardice. https://t.co/pMbc05ODRX

Instead of condemning Marc Lamont Hill’s public call for the destruction of Israel and his rationalization of violent terrorism against Jews, CNN is now *running PR for him* and claiming he never meant it. https://t.co/eymP0KujXQ

Media firefighter Brian Stelter refuses to weigh in on Marc Lamont Hill, other than pointing to report saying he was fired. Not a single CNN employee has disavowed his hateful rhetoric https://t.co/rR8zmA65vs

Marc Lamont Hill is a university professor and a CNN pundit, not some reddit troll.

Mainstream genocidal anti-Semitism. Yesterday CNN reported on the results of its anti-Semitism poll. The call is coming from inside the house.

CNN’s Marc Lamont Hill appears to call for violence against Israel and for the elimination of Israel, says, “Justice requires a free Palestine from the river to the sea.”

The phrase “from the river to the sea” is a phrase used by those who believe Israel should be eliminated. pic.twitter.com/26TL205Ylb

Hill himself tried to explain on Twitter that he does not support anti-Semitism or killing Jews, but is “deeply critical of Israeli policy and practice” and supportive of Palestinian freedom and self-determination.

“My reference to ‘river to the sea’ was not a call to destroy anything or anyone. It was a call for justice, both in Israel and in the West Bank/Gaza,” he said.

My reference to “river to the sea” was not a call to destroy anything or anyone. It was a call for justice, both in Israel and in the West Bank/Gaza. The speech very clearly and specifically said those things. No amount of debate will change what I actually said or what I meant.