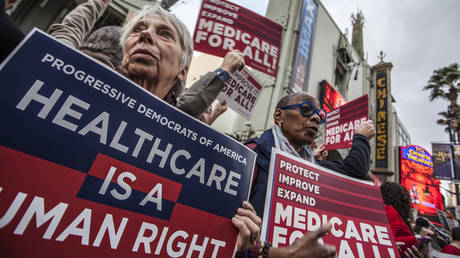 CNN’s coverage of a health insurance executive admitting to widespread malpractice essentially defends corporate greed by making it seem as if the “broken” industry only suffers from a few bad apples, RT’s Lee Camp mused.

The host of Redacted Tonight took issue with the way CNN presented testimony from a former medical director at Aetna Insurance, who admitted that he never looked at a customer’s medical records before deciding to deny coverage. In its report, CNN gently suggested that “patient advocates” have expressed concern about such practices – an angle that infuriated Lee, who said the network always finds a way to downplay any corporate malfeasance that seeps into the news cycle.

Also on rt.com
‘US revealed its villainy full-frontal by backing regime change in Venezuela’ – Lee Camp


“Patient advocates have ‘long been concerned’? Wow, that is one hell of a way of saying, ‘We’ve known this system is f***ed for a long time.’”

Camp doubled-down, arguing that CNN makes the case of corporate corruption “seem like the exception, when this is the norm. By doing this type of coverage, CNN is practically defending the insurance companies.”

Citing a World Health Organization (WHO) study which ranks America’s healthcare system among the worst of the world’s richest nations, Camp expressed exasperation that CNN would try to sugarcoat a “broken system” in which insurance companies make millions by refusing sick people coverage.