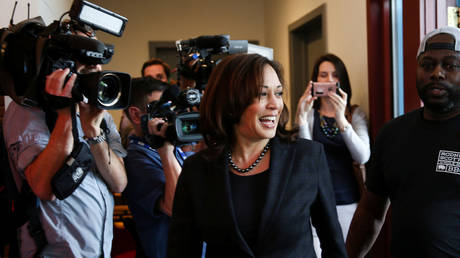 A CNN reporter covering Democratic Sen. Kamala Harris’ presidential campaign has posted a video of herself helping Harris do shopping – drawing anger from some of her media counterparts and reigniting a debate on impartiality.

CNN National Political Reporter Maeve Reston posted a video of Harris trying on a patchy jacked that made the Senator look like a human disco ball at a local store in South Caroline, where the 2020 Democratic hopeful was touring small businesses as part of her campaign activities on Saturday.

In a caption to the video, Reston wrote: “We kind of forced @kamalaharris to try on this awesome oversized rainbow sequin jacket…She snapped it up.”

While Reston was playing Harris’s personal stylist, she was accompanied by a motley crew of liberal media journalists documenting the Senator’s shopping trip. CBS News’ Caitlin Huey-Burns also posted footage from the store with the hashtag #campaignfashionreport.

The scoop on Harris’ bold fashion statement did not go unnoticed on Twitter. Some contended themselves with simply poking fun at the gaudy garment’s ‘Mardi Gras’ aesthetic, comparing it to Rubik’s Cube and ridiculing Reston’s fashion sense.

If I was your boss I’d have fired you before you could hit send on this tweet. What an embarrassment. The lack of any self awareness on how this looks is stunning.

Many, however, took the issue far more seriously, accusing the CNN and CBS reporters of failing to abide by basic journalist standards with this “hard-hitting news.”

“Embarrassing – journalists use to hide their love of the Democrats, now you just do it for the whole world to see.  And you wonder why we don’t trust your reporting?” one commentator wrote.

Embarrassing – journalists use to hide their love of the Democrats, now you just do it for the whole world to see. And you wonder why we don’t trust your reporting?

Others accused the reporters of fangirling and essentially volunteering as spin doctors instead of doing their actual job of vetting the candidates. The rhetoric echoed that of US President Donald Trump, who has repeatedly denounced CNN and the liberal media as a whole as “fake news.”

This is the modern-day “journalist,” boys and girls.

Notice how they are practically indistinguishable from political staffers, acolytes or fangirls.

But they will die before admitting they’re anything other than a “brave/neutral/impartial/non-biased “firefighter!”

Maeve, are you getting paid by @KamalaHarris campaign?
What is your job?

This is just embarrassing. So now journalists are going shopping with Harris, helping pick out clothes and then putting out glowing tweets about it. https://t.co/RX2IY0B8JL

Responding to the avalanche of criticism, Reston stood by both her fashion and political choices. Huey-Burns said that the shopping trip was only a small part of Harris’ tour, which also included “ two gaggles with reporters” where she got grilled on immigration, the green new deal and other issues.

Huey-Burns argued that the trip was not merely a shopping spree but was intended as an encouragement to women “who faced serious hardships growing up and see entrepreneurship as a way out and up.”

And the boutiques @KamalaHarris visited today were owned by women who faced serious hardships growing up and see entrepreneurship as a way out and up. This particular shop is also a non profit that helps disadvantaged people dress for success.

She noted that the shop they visited provides clothes for “disadvantaged people” on their road to success.

We had an entire news cycle in 2012 about Mitt Romney’s “mom jeans.” I think America can handle a reporter joking with a candidate about style choices on video.

Partisans, lighten up! Candidates and 2020 embeds are going to be in these unscripted moments 24/7 the next 20 months.