Cleveland Police Chief Calvin Williams issued a warning to an undisclosed number of masked protesters outside the Republican National Convention: “If you are a member of a group that causes you to have to hide your face, then you probably need a different cause.”

Police claim they have received at least a dozen calls related to concerns about the small groups of black-clad “anarchists” with masks.

So why is Chief Williams so concerned about the face masks? Too early for Halloween?

Law enforcement aggressively employs facial recognition technology at events such as the Republican National Convention to identify “persons of interest” and to catalog new persons of interest. Masked faces don’t play as well with the technology (though newer tech can get around some limitations, and iris scan tech needs only to see your, well, eyes. More below.)

With facial recognition, a computer digitizes an image of someone’s face in a way that makes fooling the system difficult, stuff like measuring the distance between eyes, the angle of one’s nose, ear lobe shape and other tough to alter things. 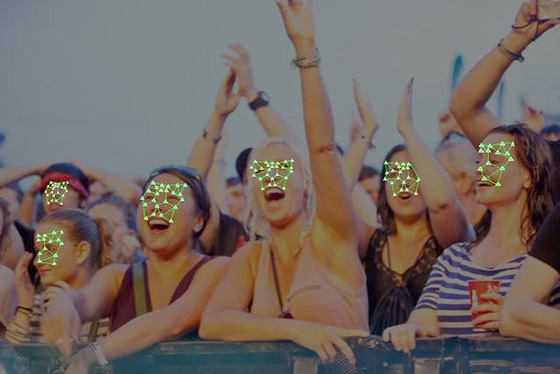 Reports suggest in addition to public gatherings where people are enjoying their First Amendment rights to assemble and speak, airports scan passengers, hotels scan lobbies, stores scan aisles, casinos scan their gambling floors and many police street cameras are tied into the systems.

A publicly-known example occurred after the Boston Marathon bombing of April 2013. The subsequent Boston Calling music fest was subject to heavy use facial recognition surveillance, one guesses in case there were more Tsarnaev brothers out there. Law enforcement in the UK used facial recognition technology to scan the faces of thousands of attendees at the Download music festival without their knowledge.

And, oh, yeah, those iris scanners.

Iris scanners have quickly moved from the realm of science fiction into everyday public use by governments and private businesses.

Iris recognition is rarely impeded by contact lenses or eyeglasses, and can work with blind individuals as well. The scanners can catalog up to 50 people a minute without requiring the individuals to stop and stand in front of the scanners.

Information gathered from iris scanners or facial recognition in multiple locations can be sent to a central database that can be used to track an individual’s movement throughout the city, or to determine which individuals in the database associate together.

So hippie protesters, have a great time in Cleveland! Actually, the cops will know if you are having a good time, because they are watching.

Peter Van Buren blew the whistle on State Department waste and mismanagement during Iraqi reconstruction in his first book, We Meant Well: How I Helped Lose the Battle for the Hearts and Minds of the Iraqi People. His latest book is Ghosts of Tom Joad: A Story of the #99 Percent. Reprinted from the his blog with permission.