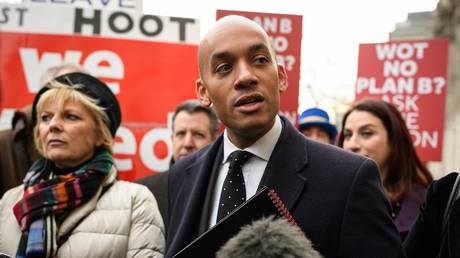 The newly-formed Independent Group’s ringleader, Chuka Umunna, has issued a ‘come and join us’ plea to pro-EU Conservative MPs, angered at what they see as the infiltration of hardline Brexiteers into their party.

Umunna, discussing ambitions for his new splinter group, a day after its official launch, insisted he wanted not just Labour politicians, but also Tories who had “misgivings” about their party to take the plunge and join his “Gang of Seven” MPs.

“There’s clearly not only a lot of Labour MPs wrestling with their consciences but also Conservatives who are demoralised by the ‘Ukip-isation’ of their party.”

The former Labour MP revealed on Tuesday that he hoped to transfer his fledgling group into a fully-formed party by the end of the year in a bid to shake up British politics.


One of those Tories who could be considering leaving her party is Dr Sarah Wollaston, MP for Totnes. The pro-Remainer who has worked closely with Umunna on the ‘People’s Vote’ campaign, took to social media on Monday to suggest that the Conservative grassroots membership had been hijacked by UKIPers.

Dr Wollaston warned that this phenomenon, coupled with the influence of the Tory hardline European Research Group, headed by Jacob Rees-Mogg, could soon mean that “there will be nothing left at all to appeal to moderate centre ground voters.”

The Telegraph article doesn’t even manage to quote my tweet correctly so here it is again: #BLUKIP has been busy taking over the Tory Party alongside the ERG. Soon there will be nothing left at all to appeal to moderate centre ground voters. https://t.co/RzeWFbiTyT

Fellow Conservative rebel Anna Soubry, who has consistently called for a second EU referendum has retweeted the message. The MP for Broxtowe has prompted rumours that she could be about to defect after deleting her slogan “Lifelong One Nation Tory,” from her Twitter profile.

The Daily Mail report that ex-Tory minister Nick Boles, who is currently facing the threat of deselection from his local Conservative Party, has refused to deny he could jump ship. Another pro-Remain MP, Heidi Allen, is said to be on ‘resignation watch’, according to The Sun.

It comes as one of the Independent Group’s MPs, Angela Smith, has been caught on live TV appearing to refer to people from black, Asian and minority ethnic backgrounds as having a “funny tinge,” prompting widespread ridicule.

Seven Labour MPs quit the party on Monday to stand as Independent MPs, hitting out at leader Jeremy Corbyn for presiding over an “institutionally anti-Semitic” party.