An extraordinary mission by the China National Space Administration helps us to learn a bit of ancient and modern Chinese culture.

The names Chang’e, Yutu and Quegiao have no meaning for people who grew up in ‘western’ cultures but are well known throughout Asia:

In a very distant past, ten suns had risen together into the skies and scorched the earth, thus causing hardship for the people. The archer Yi shot down nine of them, leaving just one sun, and was given the elixir of immortality as a reward. He did not consume it straight away, but hid it at home, as he did not want to gain immortality without his beloved wife Chang’e. However, while Yi went out hunting, his apprentice Fengmeng broke into his house and tried to force Chang’e to give him the elixir; she refused and drank it herself. Chang’e then flew upwards towards the heavens, choosing the moon as residence. Yi discovered what had transpired and felt sad, so he displayed the fruits and cakes that Chang’e had liked, and gave sacrifices to her.
…
On mid-autumn day, the full moon night of the eighth lunar month, an open-air altar is set up facing the moon for the worship of Chang’e. New pastries are put on the altar for her to bless. She is said to endow her worshipers with beauty.
Wikipedia, Chang’e

There are classic drawings of Chang’e, but she also plays a prominent role in modern anime. 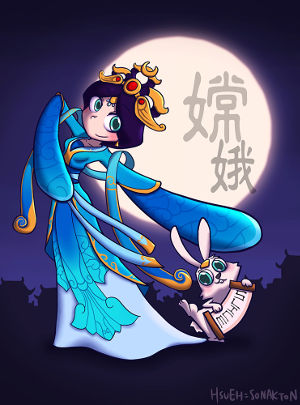 Yutu, the jade rabbit, is the companion of Chang’e. He and his mortar can been seen in the full moon. Yutu is pounding the…