Hundreds of inmates housed in Chicago’s Cook County medium-security jail can order pizza delivered to their cells, authorities said. There is one caveat – it can take days for delivery.

The new service, Recipe for Change, began at the jail in late April as part of a new program. The culinary school, taught by a local chef, Bruno Abate, operates in the basement of Division 11 of Cook County Jail in Chicago.

It is hoped inmates will learn valuable skills to help them land jobs upon their release.

“This is about helping people get jobs,” Cook County Sheriff Tom Dart told Time. “It builds an incredible sense that they’re worth something.”

Inmates cook the pies, deliver them to other inmates, and eat them.

“The pizza is outrageously good,” Dart told Time, adding that they’re made in a wood-fired pizza oven. “You would swear you are in a top-of-the-line fancy restaurant in the heart of downtown Chicago.”

There are about 1,500 inmates in the jail division, according to the Chicago Tribune.

The majority of the US prison system emphasizes punishment via isolation over rehabilitation, according to Vice.

Recipe for Change and similar programs, including the Cook County Sheriff’s garden that operates across the street and provides the kitchen with ingredients, take a more proactive approach. 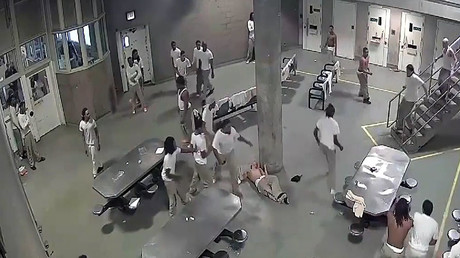 The pizzas cost between $5 for a plain margherita, and $7 for a fancy “four seasons” pie loaded up with mushrooms, soppressata (salami), olives and egg.

More than 200 pies have been ordered since the rollout, according to Cara Smith, a spokeswoman at the sheriff’s office.

Smith said there is no guarantee of quick delivery.

Inmates place their orders by submitting an official paper form, but it can take days of the pizza to arrive due to rolling schedule among detainees. Pies ordered on Monday can be delivered that afternoon or as late as Friday.

“It’s not like Dominos,” Smith said, adding that there are plans in the development stage for a food truck serving food cooked by inmates.