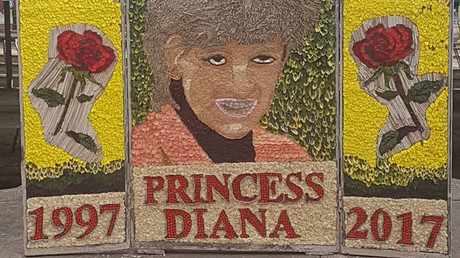 A British town’s attempt to commemorate Princess Diana with a floral arrangement has backfired in spectacular fashion, with online critics reacting in horror to the late royal’s flower portrayal.

Twenty years on from the princess’ death in a car accident, Chesterfield Borough Council made the popular royal figure a feature of this year’s annual “well-dressing” near the Town Pump.

While the gesture was obviously well-meaning, the town’s ability to craft Princess Diana’s face from flowers has been called into question.

Scores of people took to social media to pass scorn on the Princess of Wales design.

“This is bound to go viral/make national news. Putting Chesterfield on the map. It’s horrific,” one commenter said on the local council’s Facebook page.

Why did Princess Diana’s car crash? 20yrs after her death, conspiracy theories abound

The reaction on Twitter hasn’t been much kinder, with some netizens claiming it looks like a character from a horror movie.

I live here and, let me tell you, I can feel its eyes on me, even now in my house.

The floral dressing was blessed in a religious service Saturday. It is set to be on display in the town center until September 16.