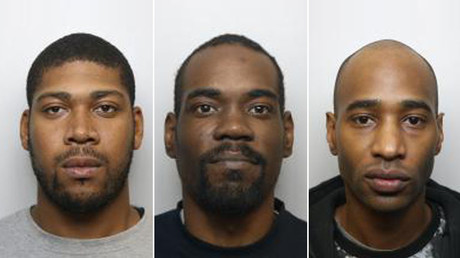 CCTV footage showing three men attacking a man outside a Leeds nightclub with a sawn-off shotgun, machete and knife has been released by police. The victim was shot in the chest from just a few feet away.

Shaquille Liddie, 24, Kemar Ricketts, 28, and Seion Allen, 33, all of no fixed abode, were jailed Monday after targeting a 42-year-old man outside the Nite Trax club on Chapeltown Road in August  2016.

Incredibly the 42-year-old victim, who has not been named, survived. As well as being shot, he also received serious stab wounds and had to undergo surgery.

Detective Chief Inspector Jim Griffiths, of West Yorkshire Police Homicide and Major Enquiry Team, said in a statement it was an “absolutely appallingly violent attack,” adding, that it was “only by sheer chance that the victim was not killed.” He said police were never able to establish the motive for the attack.

“The whole incident was captured on CCTV and it shows just how busy the area was with people enjoying the evening at the time and the obvious risks there were to others. A woman who was an innocent bystander received slash injuries to her leg during the attack,” Griffiths added.

“It took a very lengthy and protracted investigation into the circumstances to identify the men responsible and bring them to justice.”