Police have released CCTV footage of a horrifying acid attack in London in a bid to find the perpetrator, who can be seen calmly walking away from the scene. The victim may lose sight in one of his eyes, officers say.

The 26-year-old victim was on a night out in Old Street, East London, when he was approached by a man outside Bounce Bar who tried to sell him and his friend nitrous oxide.

The pair refused, and heated words were exchanged. When they walked past the suspect later, at 5:25am on Sunday, September 17, he sprayed a substance at the victim. A small amount of liquid hit the other man.

London Ambulance Service was called, and the victim went to a nearby shop where his face was doused in water. He was taken to an East London hospital suffering burn injuries to his face.

The suspect is described as being a Middle Eastern or light-skinned black male in his mid- to late-20s, around 6ft (186cm) tall, wearing dark clothes and a Gucci belt with a gold buckle. 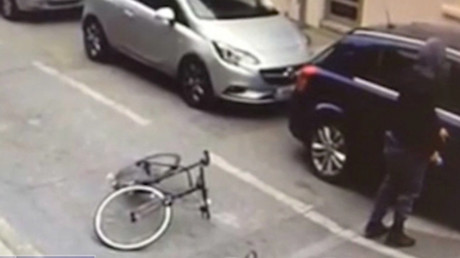 Tests are underway to ascertain the exact nature of the substance.

There have been no arrests and enquiries continue. Detectives have released the CCTV footage in a bid to find the man.

DC Dave Barrett of Hackney Police said in a statement it was a “violent, unprovoked and cowardly attack by a troublemaker who has left his victim with life-changing injuries.”

“We would urge anybody who recognizes the man in the picture, or who was in the area at the time and may have information that could assist our investigation, to get in touch.”

London has recently seen a surge in acid attacks this year, which medics have described as an “epidemic.”

Acid has been used in strings of robberies and attempted vehicle thefts, as well as vicious revenge attacks.

Earlier in the year, 12 people suffered burns and in some cases lost their vision after an attack in a Hackney nightclub.