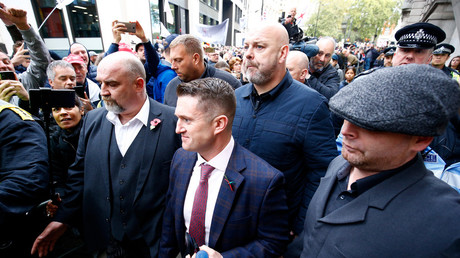 EDL-founder Tommy Robinson’s contempt of court charges will now be referred to the Attorney General, as the case is ‘too complex’ to hear at the Old Bailey.

Robinson, real name Stephen Christopher Yaxley-Lennon, was charged with contempt of court after he live-streamed details of an ongoing child grooming trial on Facebook.

After receiving a statement from Robinson, Judge Nicholas Hilliard QC said the case should go to the Attorney General for his consideration.

Lawyers would not be able to perform an appropriate cross-examination of the evidence, the court heard.

“I think it necessary to look at quite a lot of the detail of what Mr Yaxley-Lennon said in the broadcast as to come to the overall picture as to what happened.

“I’m satisfied in the light of the issues as they now appear as they emerged from the statement of yesterday, that cross-examination of Mr Yaxley-Lennon is necessary for a proper and thorough examination and resolution of the case that is in the public interest,” the Judge stated

Robinson was then released on bail.

Scores of Robinson’s supporters rallied outside the Old Bailey, chanting his name, and chanting “we want Tommy out.”

Among the numerous Union Jack flags, were some for UKIP, who’s leader Gerard Batten has often come out in support of Robinson. Also present was a flag for the white nationalist  Identitarian movement.

Behind a line of police, were a smaller number of anti-racist activists, who held banners condemning the founder of the far-right EDL.

Robinson addressed the crowd before entering the court, during which he labelled journalists as “the enemy of the people.”

“Their attempts to silence and stop people having the knowledge of the Muslim rape gangs that are terrorizing our nation.

“The entire world is now watching.”

Robinson was given a 13-month sentence in May for breaching contempt of court laws outside of Leeds Crown Court. He was arrested after confronting defendants while recording a live video on Facebook as they entered the Leeds courthouse to face trial over sexual abuse allegations.

In August the far-right activist was freed after three judges quashed the original sentence.

The defendants in question were jailed for terms totaling 221 years after launching a “campaign of rape and other sexual abuse” against teenage girls in Huddersfield.