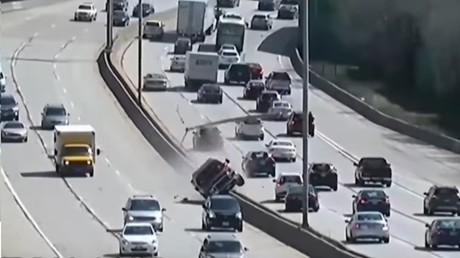 A highway traffic camera has captured extraordinary footage of an out-of-control pickup truck mounting the central concrete barrier of a highway and barrelling into two light poles, sending them hurtling into oncoming traffic.

The incident took place on Interstate 43 in Wisconsin. Despite the uprooted poles erratically bouncing around on the highway, amazingly, no one was hurt.

The driver was stopped by police and taken away in handcuffs after Milwaukee County sheriff’s deputies administered a field sobriety test, local news outlet WISN reports. The sheriff’s office did not disclose what charges the driver is facing.

It’s far from the first time an out of control pickup had been caught wreaking havoc on camera. In January last year, CCTV on a passenger bus in Syracuse, New York, caught the moment a vehicle accidentally smashed into its side.

That same month, a dashcam caught a driver in Louisiana ramming into a state trooper. The driver was arrested and charged with driving while intoxicated, with police stating he was suspected of being “impaired on heroin at the time of the crash.”