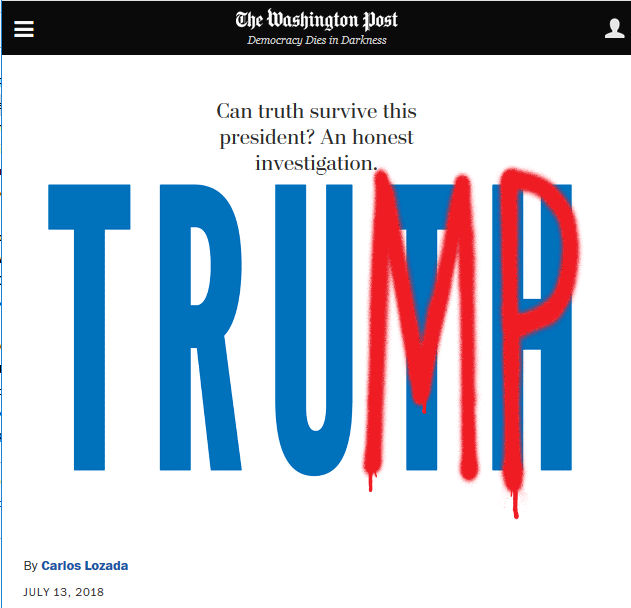 Carlos Lozada, the nonfiction book critic for the Washington Post, promised “an honest investigation” of whether truth can survive the Trump administration in the lead article in the paper’s Sunday Outlook section. He delivered considerably less.

Most importantly and incredibly, Lozada never considers the possibility that respect for traditional purveyors of “truth” has been badly weakened by the fact that they have failed to do so in many important ways in recent years. Furthermore, they have used their elite status (prized university positions and access to major media outlets) to deride those who challenged them as being unthinking illiterates.

This dynamic is most clear in the trade policy pursued by the United States over the last four decades. This policy had the predicted and actual effect of eliminating the jobs of millions of manufacturing workers and reducing the pay of tens of millions of workers with less than a college education. The people who suffered the negative effects of these policies were treated as stupid know-nothings, and wrongly told that their suffering was due to automation or was an inevitable product of globalization. (Yes, I am once again plugging my [free] book, Rigged: How Globalization and the Rules of the Modern Economy Were Structured to Make the Rich Richer.)

These claims are what those of us still living in the world of truth know as “lies,” but you will never see anyone allowed to make these points in the Washington Post. After all, its readers can’t be allowed to see such thoughts.

This was far from the only major failure of the purveyors of truth. The economic crisis caused by the collapse of the housing bubble cost millions of workers their jobs and/or houses. While this collapse was 100 percent predictable for anyone with a basic knowledge of economics, with almost no exceptions, our elite economists failed to see it coming, and ridiculed those who warned of the catastrophe.

Incredibly, there were no career consequences for this momentous failure. No one lost their job and probably few even missed a scheduled promotion. Everyone was given a collective “who could have known?” amnesty. This leaves us with the absurd situation where a dishwasher who breaks the dishes get fired, a custodian that doesn’t clean the toilet gets fired, but an elite economist who completely misses the worst economic disaster in 70 years gets promoted to yet another six-figure salary position.

And, departing briefly from my area of expertise, none of the geniuses who thought invading Iraq was a good idea back in 2003 seems to be on the unemployment lines today. Again, there was another collective “who could have known?” amnesty, with those responsible for what was quite possibly the greatest foreign policy disaster in US history still considered experts in the area and drawing high salaries.

When we have a world in which the so-called experts are not held accountable for their failures, even when they are massive, and they consistently look down on the people who question their expertise, it undermines belief in truth. It would have been nice if Lozada had explored this aspect of the issue, but, hey, it’s the Washington Post.

A version of this post originally appeared on CEPR’s blog Beat the Press (7/15/18).