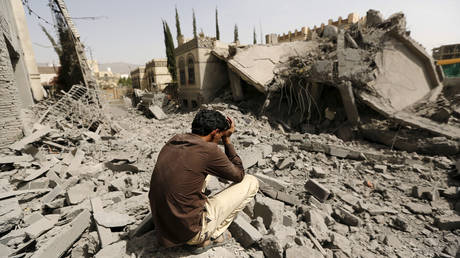 The court case brought by the anti-arms organisation at the Court of Appeal, Tuesday, is focused on the legality of arms sales to Saudi Arabia. It’s being backed by other groups, including Human Rights Watch, Oxfam and Amnesty International.

CAAT argues that the UK government has refused to halt military equipment sales to the Kingdom, “despite overwhelming evidence” that British-made jets and bombs are being used, in contravention of international humanitarian law, in the war in Yemen.


More than 10,000 people have been killed since a Saudi-led coalition began its assault against Houthi rebels at the behest of the Yemeni government, according to CAAT. The group claims UK-made weapons have helped create an ongoing “humanitarian catastrophe.”

Lucy Claridge, the groups’ strategic litigation director, speaking outside the court, urged the government to take the necessary action to stop the devastation. She encouraged UK ministers to follow the lead being set by a number of countries across Europe who have stopped selling arms to Saudi Arabia.

Ministers are signing a death warrant for the people of Yemen.

The UK’s official line on the conflict in Yemen is to seek a “sustainable political solution.” However, in February, UK Foreign Secretary Jeremy Hunt pleaded with his German counterpart to drop Berlin’s ban on weapons exports to Saudi Arabia, fearing it would damage the bottom line of UK and European arms manufacturers.

Despite pressure from London and Paris to reconsider their temporary restriction, Berlin has responded by announcing an extension of its ban until at least October. The embargo was initially supposed to expire on March 9.

In December last year, it was reported that the death toll from the Yemen conflict had surpassed 60,000 people.