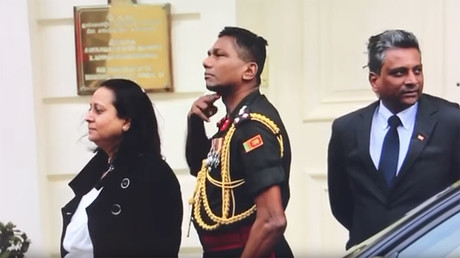 Labour is calling for the expulsion of a Sri Lankan military official from the UK after he was filmed making “throat-cutting gestures” to Tamils protesting outside the embassy in London.

Brigadier Priyanka Fernando, posted to London as the Sri Lankan High Commission’s defense attaché last year, can be seen standing outside the High Commission opposite members of the Tamil community who were peacefully protesting the ongoing persecution of Tamils in Sri Lanka.

Footage shows him repeatedly running a finger across his throat, signaling the slitting of one’s neck.

Labour MPs Joan Ryan and Siobhain McDonagh have called on Foreign Secretary Boris Johnson to expel Fernando from Britain, saying his actions were “an obvious attempt to intimidate the Tamil people who were present.”

“This is inappropriate, unacceptable and threatening behavior, from someone who is serving in an official capacity as a guest of this country,” Ryan and McDonagh, respectively the vice chair and senior vice chair of the Tamil All Parliamentary Group (APPG), said in their letter to Johnson.

“We urge you to make immediate representations to Sri Lanka’s High Commissioner about this matter, and we request that you withdraw Brigadier Priyanka Fernando’s diplomatic papers and expel him.”

Inappropriate, unacceptable and threatening behaviour, from someone who is serving in an official capacity as a guest of this country. pic.twitter.com/AmEMKjfkkF

Journalists for Democracy in Sri Lanka (JDS) and the International Truth and Justice Project (ITJP) released a report following the incident that said Fernando was identified as a commander who led troops in a military offensive in 2009 that massacred tens of thousands of Tamil civilians.

It added that as part of the military offensive in 2009, Fernando fought in Weli Oya and Janakapura for the 11 Gemunu Watch Battalion as part of the 59 Division of the Sri Lankan Army. The United Nations OHCHR Investigation into Sri Lanka detailed multiple incidents, implicating the 59 Division in the shelling of hospitals south of Mullaitivu, JDS and ITJP says.

“Brigadier Fernando was clearly active in the final offensive in the north of Sri Lanka from at least April 2008 – and on those grounds alone should have been subjected to a scrupulous vetting process by both the government of Sri Lanka and the UK which should have precluded his diplomatic appointment to London,” the briefing said.

“The UK government has clearly not done the due diligence to ensure that potential human rights violators are prevented from entering the UK and being allowed to hold office in the UK.”