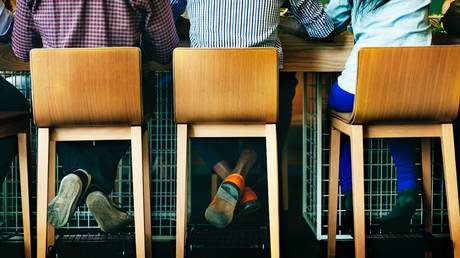 A middle school in California invoked disciplinary measures against a dozen kids after shocked parents discovered that they shared hateful messages in a private chat room and laid together in the shape of a swastika.

In total, 12 students at Matilija Junior High School in Ojai, southern California received a “disciplinary consequence” for exchanging offensive texts in a closed chat room or forming a ‘human swastika’ on a lawn during lunch break, the local school district’s superintendent Andy Cantwell confirmed on Tuesday.

His remarks followed an emotional meeting, between parents and Ojai community members on the school grounds, to discuss the incidents.

The existence of the chat room was discovered back in December. A parent had brought 112 pages printed from the online group to the school officials. The students were sharing messages and pictures of a racist and sexist nature. At least one student made a comment about bringing knives to school.

The students also shared a photo of nine of them lying on a field together “to form the shape of a swastika” during lunch, the school wrote in a letter to the local school community. The incident is said to have been staged too quickly for campus supervisors to notice anything.

It was initially reported that 12 students participated in the chat group, but school officials later said that it had 28 people listed as members.

The school’s administration and staff were “beyond saddened” by the “reprehensible student actions,” principal Javier Ramirez and assistant principal Carol Paquette wrote in a letter in December. A probe, launched by the local sheriff’s office, found no active threat to the students.


Matilija Junior High School is around 60 percent white and around 32 percent Hispanic or Latino.

In recent years, there has been an increase in incidents involving hateful symbols in US schools. In November, swastikas were discovered in schools in Reading, Malden and Melrose, Massachusetts. In December, a teacher found swastikas scrawled on a stairwell inside Camelback High School in Phoenix, Arizona.