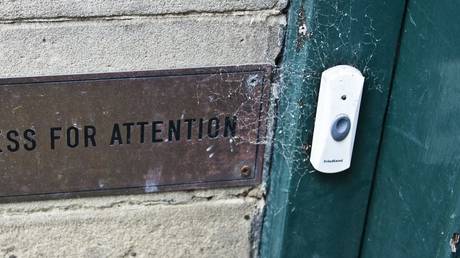 Police have arrested a California man who was captured on video licking the doorbell of a family he’d never met. He also stole a few extension cords from their Christmas decorations.

Roberto Daniel Arroyo spent an unhealthily long time licking the doorbell of the Dungan family home on Saturday night before allegedly making off with the cords. Perhaps not surprisingly, he is known to police, who are seeking to charge him with “misdemeanor prowling, theft, and violation of probation,” according to Salinas Police spokesperson Miguel Cabrera.

The bizarre display of doorbell-lovin’ was caught on surveillance camera while Sylvia and Dave Dungan were out of town, but their children were inside the home at the time. “This just kind of reinforces how important it is to have security within your home,” Sylvia said.

“This guy’s getting some sick jollies off of something,” David commented after watching the man-on-doorbell action in disbelief.


The Dungan family has since disinfected their bell, bleached their doorknobs, and thoroughly cleaned their porch. Arroyo also appeared on camera relieving himself on the property and at one point seems to lie down to sleep.

At least one neighbor of the Dungans told police he had heard a knock on his door early that same morning. No word on if his doorbell was damp.