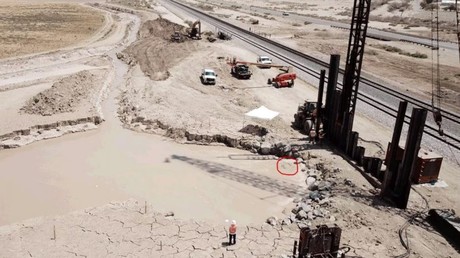 California is currently fighting a losing battle to contain a rather turgid and slow moving foe. The state is attempting to stop a creeping mud geyser threatening local infrastructure near the town of Niland, Imperial County.

The movement of the mass of gloopy soil could be likened to a creature from a horror B-movie, thanks to it seeping and sliding towards human civilisation.

Mud pots are a natural occurrence that usually take place when a hot acidic spring dissolves rock and soil. Often the pools of muck and water can be seen bubbling due to the geothermal heat.

The Niland geyser, named after the nearby town, has prompted local authorities to declare an emergency, after it slid towards Union Pacific Railroad tracks and buried nearby utilities. Transport officials have more recently built temporary diversions in a bid to bypass the moving mud lake.

Located near an intersection of the CA-111 highway and Gillespie Road, the geyser – or mud pot – has been a moving feature of the local landscape since the 1950s, according to the US Weather Channel. However, in recent times the natural phenomenon has gathered pace and moved “an additional 60 feet,” report the Imperial County Public Health Department.

Speaking to the LA Times, Alfredo Estrada, an Imperial County’s fire chief, described the situation as a “slow-moving disaster.” Wells have been dug in the area and a shoo-fly train track laid to give safe passage – but still the mud geyser, which sits on the San Andreas fault line, represents a growing risk.

READ MORE: Not Sahara Desert or Iceland geysers! These amazing places are actually in Russia

This month the natural mud spring was reported to have overcome a steel wall built by Union Pacific as a defense barrier.

“The geyser continues to encroach on critical infrastructure such as the Kinder Morgan pipeline and the State Highway,” the local government said in an update. “Officials from Caltrans are working on their contingency plans in the event that the geyser affects State Highway 111.”