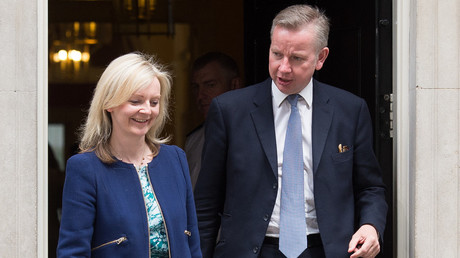 A Tory minister has reportedly been caught taking a swipe at colleagues during lunch at a London restaurant, labelling PM Theresa May as “worse” than David Cameron at managing people and claiming “everyone hates” Michael Gove.

Liz Truss, Chief Secretary to the Treasury, is said to have made her damning remarks in a candid conversation with a man, thought to be a journalist, according to Green Party candidate Zack Polanski, who claims to have been present at the restaurant.

Polanski took to social media, posting Truss’ reported candid opinions of her Tory cabinet colleagues. If true, it’s further evidence of government infighting sparked by Brexit, although Truss – a Remain voter – attacked Tories from both wings of the party.

Liz Truss: ‘The only person worse at managing people than David Cameron is…Theresa May.

She’s such a pacifist whereas I embrace the chaos. I’m a thrillseeker. I’m enjoying watching France.. Macron is such a technocrat & there are consequences- worse than a lame Blair & Brown.’

According to Polanski, Truss attacked her boss May’s ability to manage people, labeling her a “pacifist.” Meanwhile, Truss is said to have described herself as a “thrillseeker” who likes to “embrace chaos.”

Truss: Theresa should have used Michael more when making the deal. Used him to get the brexiteers out. Mind you everyone hates him – they all blame him for not letting Boris be Boris. Then we wouldn’t have Theresa as Prime Minister – and to be fair, they’re right. 11/13

Truss, who famously gave a Tory conference speech which included a rant about cheese, reportedly ridiculed Defence Secretary Gavin Williamson for going “quiet” and failing with his “modernisation” agenda.

READ MORE: ‘Bored s***less’: Cameron threatens to return to politics, Twitter urges him to ‘stay in the shed’

Her most reported barbed comments were reserved for Gove, the environment secretary. Truss reportedly said that while he should have been used more by the PM during Brexit negotiations, fundamentally “everyone hates him” namely for impeding Boris Johnson in his bid to take over from Cameron in 2016.

On her own vision of post-Brexit Britain, it’s all about roads for Truss. She thinks the country needs to take inspiration from the USA and get companies such as Burger King to sponsor Britain’s motorways, Polanski posted.

READ MORE: Top Tory donor wants Theresa May replaced by one of Britain’s most unpopular MPs

According to Polanski, Truss even gave her opinion on the struggles of French President Emmanuel Macron, who is facing widespread civil unrest. “I’m enjoying watching France… Macron is such a technocrat & there are consequences, worse than a lame Blair & Brown,” she allegedly added.

RT has reached out to Liz Truss for comment, but has received no reply at the time of publishing.