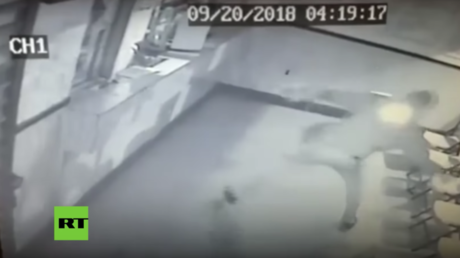 A hilarious attempted heist ended in what appeared to be a mild concussion after the would-be thief was struck on the head with his own weapon.

Maryland police released the footage of the botched raid which was captured on a restaurant’s CCTV system on September 20.

According to police, the suspect had some initial success, breaking the front glass window of the takeout restaurant with a brick or large rock. He became overconfident, however, and failed to plan for the second line of defense: bulletproof glass protecting the cash register.

The suspect’s projectile rebounded off the bulletproof glass and socked him right in the head.

He threw the rock with such force that he appears to temporarily knock himself out, as he is seen laying down on the ground for several minutes before gathering his senses, or what was left of them, and fleeing the scene.

Police are appealing to the public for more information to help with their inquiries, asking if anyone knows someone with a “suspicious head injury” to contact them immediately.