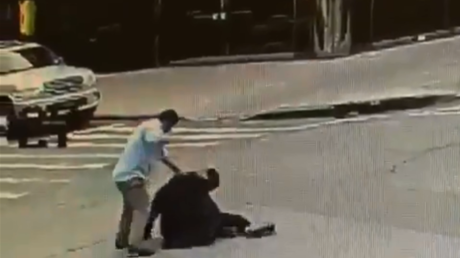 A shocking video has emerged of an elderly Jewish man getting pummeled by an attacker in the middle of a pedestrian crossing in Brooklyn, New York. The assailant knocked down the 62-year-old man before striking him multiple times.

The violent attack took place around 7.30am Sunday morning as the elderly man, clad in traditional black Jewish clothing, was heading towards a synagogue in the Borough Park neighborhood.

Surveillance footage shows a car pulling up at the curb in the view of the Jewish man. After what appears to be a brief verbal argument, a man gets out of the car and rushes towards the passerby chasing him down to the nearby zebra crossing.

Moments later, the 62-year-old is pinned to the ground and is being dragged by the assailant, randomly kicked on the head and back. As the elderly man attempts to stand up, he is immediately knocked back down on the ground. As the attacker proceeds thrashing the victim, another Orthodox Jewish man shows up and attempts to break up the fight, distracting the assailant’s attention. While the perpetrator is chasing after the second man, the first victim takes the opportunity to flee.

Police have arrested the 38-year-old attacker, who has been charged with assault. He also faces possible hate crime charges.

Jewish media reported that the victim was heading to a morning prayer in a nearby synagogue. He was lightly injured and taken to hospital for a check-up.

The apparently unprovoked attack in broad daylight has outraged the Jewish community. New York district manager Barry Spitzer, who is a himself an Orthodox Jew, condemned the attack calling it “vicious assault.”

“Justice needs to be served swiftly and fully,” he tweeted.

New York Anti-Defamation League has said it is “shocked and disgusted” by the attack, praising NYPD and its hate crimes task force for a swift response.