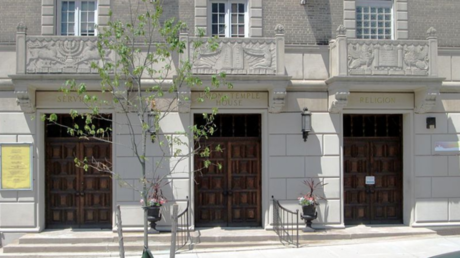 A political debate at a synagogue in Brooklyn was canceled amid security concerns after anti-Semitic slurs were discovered scrawled on the walls of the building’s stairwell including, “Jews Better Be Ready.”

“Broad City” star Ilana Glazer was scheduled to interview journalist Amy Goodman and New York state senate candidates Andrew Gounardes and Jim Gaughran to discuss how politicians actually serve the local community. However, before the event opened its door, anti-Semitic messages were discovered on the stairwell of Union Temple in Brooklyn Heights at approximately 8pm Thursday.

The words “Die Jew Rats We Are Here,” “Jews Better Be Ready,”“Rose” and “Hitler,” were discovered on the second and fourth floors of the temple, NBC New York reports.

Organizers were forced to cancel the event amid fears of a copycat attack following the Pittsburgh massacre last Saturday at the Tree of life synagogue in which 11 people were shot dead and the perpetrator shouted: “All Jews must die!” It marked the deadliest anti-Semitic mass shooting in US history.

This latest incident is one of many alleged cases of anti-Semitic vandalism in the aftermath of the Pittsburgh mass shooting: vandals scrawled a swastika and racial epithet in Brooklyn Heights and a synagogue in California was defaced with the words “f**k Jews” on Wednesday.

Last month a man was charged with assault as a hate crime after beating an orthodox Jew in broad daylight in the middle of Borough Park street.

The Union Temple case is being investigated by the NYPD’s Hate Crimes Unit, but no suspects have been named or arrested thus far.