The British military is “thinking hard” about how they can help in the event of a no-deal Brexit, a general said, as Theresa May’s UK-EU deal comes under increased attack from Brexiteers and Remainers, alike.

General Sir Nicholas Carter, the chief of Britain’s defense staff, told BBC’s Andrew Marr Show on Sunday, they were making preparations on the best course of action to take if a situation arose where ports and roads were blocked, a potential consequence of the UK crashing out of the EU without a deal.

Carter told Marr: “What we always do of course is to make sensible contingency plans for all sorts of eventualities.

The general claimed the army had not, as yet, been asked by the Tory government to help stockpile food and medicine, with little under five months to go until the UK officially leaves the EU on March 29. 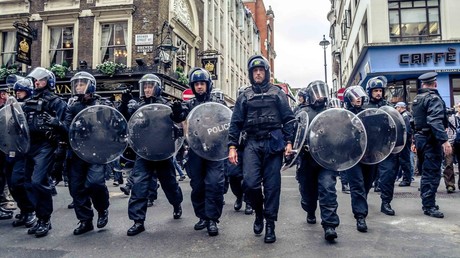 It comes after councils were warned that a no-deal Brexit could prompt three months of disruption, with possible food and petrol shortages as well as issues with withdrawing cash from banks, the Mirror reports.

Defence Minister Tobias Ellwood confirmed: “It is the job of the Chief of Defence Staff, indeed the MoD and the Defence Secretary, to consider all scenarios whether how vague or rare they might be or whether they might be something that’s expected, we have to plan for every single scenario.”

Prime Minister Theresa May was dealt a blow to her Brexit plans on Friday, after Boris Johnson’s lesser-known brother, Jo, resigned from her cabinet as transport minister, claiming the Brexit deal being finalized “will be a terrible mistake,” and called for a ‘people’s vote’ to settle the polarising issue.

Former education secretary, Justine Greening, added to pressure being exerted on May after insisting there was no chance of her proposed Brexit deal being backed in a parliamentary vote, labelling it the “worst of all worlds,” in an interview on BBC 4’s Today programme on Monday.