Anti-corruption campaigners have accused the British government of falling short on its longstanding commitment to fight corruption, voicing concerns over the government’s “rejection of the need to stop the UK tax havens selling secrecy.”

Responding to recommendations by the International Development Committee (IDC) in its October 2016 report ‘Tackling corruption overseas’, officials once again asserted on Monday the UK is a “leader in the fight against corruption and promoting transparency.”

The government has rejected the IDC’s allegation it had “failed to persuade the UK’s Overseas Territories and Crown Dependencies to create central public registers of beneficial ownership” designed to end tax secrecy.

It argued that “almost all” of the relevant Overseas Territories and Crown Dependencies have thrown their weight behind an initiative, launched by the UK for the “development of a new global standard on automatic exchange of beneficial ownership information between countries.”

In a statement issued on Tuesday, Shauna Leven, corruption campaign director at Global Witness, an NGO fighting against poverty, corruption and human rights violations, said, “We are deeply concerned by the government’s rejection of the need to stop the UK tax havens selling secrecy.

“Stopping anonymous company owners exploiting our tax havens is a crucial component of any credible strategy to fight corruption overseas. This new position is a major U-turn on [former Prime Minister] David Cameron’s promise to remove the ‘cloak of secrecy’ from shell companies, and calls into question Theresa May’s commitment to continuing the UK government’s transparency and anti-corruption drive,” she added.

“Other parts of the UK government are falling short,” he noted, however.

“Also disappointing is the government’s refusal to publicly disclose the information it will collect on where UK-based multinationals are making profit,” he added.

“If made public, this information could help tax authorities and civil society, including in the world’s poorest countries, work out where multinationals are avoiding paying tax. This would make it easier for authorities and civil society to pressure these corporations to pay appropriate levels of tax in the countries where they are operating and would make it harder for corporations to shift profits made in developing countries to other low-tax jurisdictions,” Twigg said.

According to the IDC report, the amount of money lost by developing countries through corrupt practices surpassed the support they receive through foreign aid.

Global Witness highlighted the case of the Democratic Republic of Congo (DRC), where it claims “inconsistent UK policy on corruption is undermining the effectiveness of aid contributions in some circumstances.” 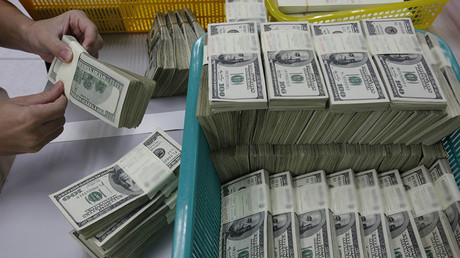 The committee also stressed in its report that revelations like the Panama Papers showed “how far the UK needs to go to effectively tackle corruption both in the UK and overseas.”

“As the Panama papers showed, we will not crack this unless we stop the UK’s tax havens from helping the world’s criminal and corrupt hide from the law,” Leven said, adding that over half of the offshore companies revealed in the Panama Papers were registered in the British Virgin Islands, a UK tax haven.

“This demonstrates the role the tax havens play in enabling the corruption that keeps poor countries poor. The UK government’s opposition to public registers of the beneficial owners of companies in its tax havens is particularly concerning, as it comes just ahead of crucial EU negotiations over implementing public registers of the owners of companies and trusts across Europe.”

“[Prime Minister] Theresa May’s refusal to tackle the problem in her own backyard raises serious questions about her government’s ability to walk its talk on fighting corruption overseas,” Leven noted.

On Tuesday, giant British manufacturer Rolls-Royce apologized after it was found to have paid bribes to senior foreign officials and staff in Indonesia, Thailand, India, Russia, Nigeria, China and Malaysia‎ from 1989-2013.

In Indonesia the company gave $2.25 million, plus a Rolls-Royce Silver Spirit car, to an individual in exchange for a “favor” for Trent 700 aero engines to be provided to Garuda Indonesia airlines, Britain’s Serious Fraud Office (SFO) said.

In Iraq, Rolls-Royce middlemen bribed local officials after they voiced concerns about turbines the company had sold. Rolls admitted to paying officials at state-run energy companies in Kazakhstan, Thailand, Brazil, Azerbaijan, Angola and Iraq over $35 million in order to win contracts, the US Justice Department said, Reuters reports.

Rolls (which also makes engines for combat jets, ships and nuclear-powered submarines) would pay £671 million ($831 million) in penalties to settle the bribery investigation led by British, US and Brazilian authorities. The SFO said it was the biggest investigation in its history.

In his ruling, the judge said the penalty, the highest ever enforcement action against a company in Britain for criminal conduct, reflected the gravity of the company’s misconduct alongside its corporate reform and cooperation with authorities, Reuters reports.

Rolls agreed to pay £497 million ($612 million) to the SFO, plus interest and a payment in respect of costs.