Britain and the US reportedly knew where Islamist militant group Boko Haram had taken at least 80 kidnapped Nigerian schoolgirls, but felt the risk was too great to launch a rescue operation, a former British diplomat has revealed.

In 2014, Boko Haram insurgents kidnapped 274 schoolgirls from a boarding school in Chibok, northeastern Nigeria. Though 57 of the girls managed to escape, the remaining 217 have not been seen since a video was released showing them reciting from the Koran a month after the abduction.

Two years have gone by since the girls were abducted by Boko Haram in Nigeria and there is still no sign of them.#BringBackOurGirls

Former British High Commissioner to Nigeria Dr Andrew Pocock has revealed that although British and American surveillance operations spotted a large group of girls, a rescue attempt would have been too risky.

“A couple of months after the kidnapping, fly-bys and an American ‘Eye In The Sky’ spotted a group of up to 80 girls in a particular spot in the Sambisa forest, around a very large tree, called locally the Tree of Life, along with evidence of vehicular movement and a large encampment,” Pocock told the Sunday Times. 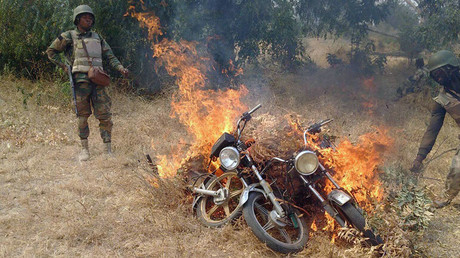 “You might have rescued a few [girls] but many would have been killed. My personal fear was always about the girls not in that encampment — 80 were there, but 250 were taken, so the bulk were not there. What would have happened to them? You were damned if you do and damned if you don’t.

“A land-based attack would have been seen coming miles away and the girls killed.

“An air-based rescue, such as flying in helicopters or Hercules, would have required large numbers and meant a significant risk to the rescuers and even more so to the girls.”

The kidnapping thrust the militant group into the spotlight and sparked an international outcry against what campaigners saw as the Nigerian government’s slow response, triggering the #BringBackOurGirls movement.

Campaigners believe the girls have been separated into small groups and taken to areas held by the militant group.

The group, which has pledged allegiance to Islamic State (IS, formerly ISIS/ISIL), launched military operations in 2009, since which time the insurgency has left some 20,000 people dead and forced 2.5 million to leave their homes.