Britain will invest £2 billion ($2.7 billion) by 2025 to develop a fighter jet called ‘Tempest,’ which can be operated by pilots or function as a drone, the UK defense secretary has said at an unveiling of the new warplane.

Gavin Williamson, speaking at the Farnborough Air Show with a life-sized model of the new fighter jet on show, said the program was aimed at securing Britain’s status as a world leader in fighter technology, and maintaining its ability to control the air space in future wars.

The aircraft, which is earmarked to replace the existing Typhoon fighter jet, will be developed and manufactured by BAE Systems, engine-maker Rolls Royce, and Italy’s Leonardo, a global high-tech company that specializes in aerospace, defense and security. 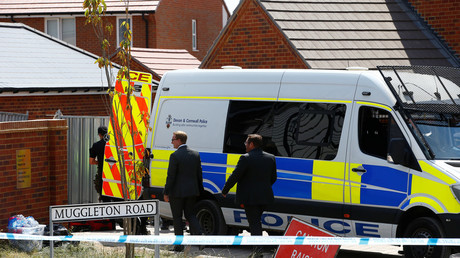 Charles Woodburn, chief executive of BAE Systems, told BBC Radio 4’s Today program that the new jet would be some time in coming.

“We already have the Typhoon platform, which forms the absolute bedrock of European air defense, and that’ll be in service for decades to come,” he said.

The defence secretary said that Britain, which is currently excluded from a Franco-German fighter program that launched in July 2017, was open to forming a partnership with other nations, and would see the new jet take to the skies by 2035.

French President Emmanuel Macron has said that the Franco-German deal will improve his nation’s chances in export markets. The new fighter jet will replace France’s Rafale combat aircraft and the Eurofighter, reports the Financial Times.

It’s seen as a ploy by two of Europe’s leading countries to help reinvigorate EU integration and has raised questions over Britain’s role in future European defense projects, with Brexit looming.