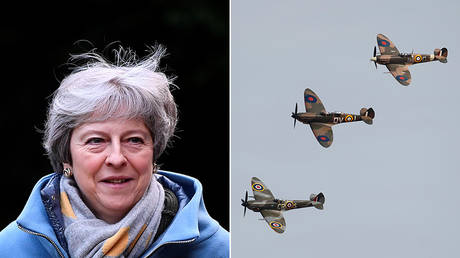 While Brexiteers often call on Britons to rediscover their ‘Blitz spirit’ once the UK leaves the EU, a BBC News gaffe took things one step further by pairing old WWII Spitfire footage with a story about Theresa May in Brussels.

The embarrassing-yet-hilarious error took place at the end of Wednesday night’s edition of the News at Six. Recapping the day’s main news.

“Theresa May says she intends to go back to Brussels to negotiate her Brexit deal but EU leaders say the deal is done and they will not reopen talks,” newsreader Sophie Rawton said.

As Rawton read her script and the iconic BBC News theme began playing, viewers were shown grainy black and white footage of RAF aircraft landing and flying in formation, giving the impression that May was dramatically traveling to Brussels in a fleet of vintage British warplanes.

The segment initially was supposed to show footage of May.

Responding to the error, Paul Royale, who edits both the News at Six and Ten, later explained on Twitter that the gaffe was down to “simple human error.”

For those wondering – simple human error at end of #BBCNewsSix. A production mistake meant pictures used earlier to tease story about Biggin Hill ended up in our top story recap at close of show. If and when it happens pretty certain PM not travelling to Brussels like this. pic.twitter.com/P2yXMnkkCK

“A production mistake meant pictures used earlier to tease story about Biggin Hill ended up in our top story recap at close of show,” Royale explained.

“If and when it happens pretty certain PM not travelling to Brussels like this,” he joked.

This was exactly the thoughts the Twitterati shared online.

It was brilliant. Perfect. Beyond hilarious. Be thankful it wasn’t pictures of of a Spitfire going down into the drink, over the words of Theresa May travelling to Brussels – can you imagine the charges of BBC bias???? https://t.co/rwG3xmC9S7

However, that didn’t stop others from speculating that the mistake was an appeal to Brexiteers who in the past have invoked the nationalist ‘Blitz spirit’ to dismiss warnings from Remainers that Brexit would cause unknown economic turmoil.

I saw that. It was very funny although I suspect that there were some ERG-ophiles who thought it was real and started cheering.

Well since many Brexiteers seem to base their stance on a ‘We won the war’ ticket, maybe she is flying to Europe like that 😟😬

If the S*n or Daily Mail had a TV news show, they’d do that. I keep wishing the proper BBC would come back.

Others meanwhile boiled it down to none-other than a “classic Freudian slip.”

Located 30km (18.6 miles) south of London, Biggin Hill was a vital command centre for Hurricane and Spitfire aircraft of RAF Fighter Command, protecting the UK’s south-east from German bombing runs during the Battle of Britain.