Foreign Secretary Boris Johnson says he’ll phone his counterpart in Iran amid fears comments he made could lead to a British woman in an Iranian jail having her sentence doubled. Johnson incorrectly claimed Nazanin Zaghari-Ratcliffe was in the Islamic republic to “train journalists” when she was actually on holiday.

“When I look at what Nazanin Zaghari-Ratcliffe was doing, she was simply teaching people journalism, as I understand it,” Johnson told a select committee last week. Following his comments, the 37-year-old woman was taken to an unscheduled court hearing in Iran, where Johnson’s remarks were cited as proof of her guilt. 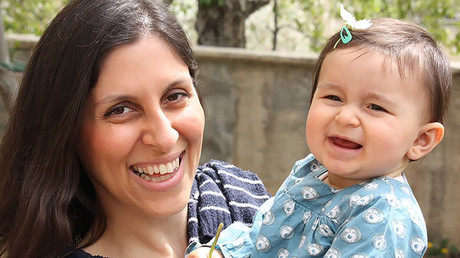 The charity worker, who was employed by the Thomson Reuters Foundation as a project manager, is already serving a five-year prison sentence. She now faces a further five years in jail on new charges of “propaganda against the regime.” Zaghari-Ratcliffe had been eligible for parole under the early-release scheme from November 23.

Tory trade secretary Liam Fox, however, has urged people not to overreact to Johnson’s “slip of the tongue.” Speaking on BBC’s Radio 4, he said: “We all make slips of the tongue, we’ve got to very careful that we are not overreacting to this in a way that is going to give the Iranians [an excuse to extend the sentence].”

“I think it is important we keep this in perspective … the point the Foreign Secretary was making was that this arrest and detention of a UK citizen is not acceptable,” he added.

Richard Ratcliffe, Zaghari-Ratcliffe’s husband, has demanded Johnson provide answers over the blunder and “retract” the remarks in Parliament. He maintains his wife was visiting family and is innocent.

Ratcliffe said the “worst thing” Johnson could do now was “suddenly go quiet and to create this problem without making any clarifications … You can’t make a muddle and then leave it. That would be the worst of both worlds,” he told the BBC.

He said he still hoped his wife and young daughter would be back home in the UK for Christmas. Their daughter, who was just 18 months old when Zaghari-Ratcliffe was arrested, is still in Iran with family.

The government said Johnson would call Iran to avoid misrepresentation. Johnson’s remarks “provide no justifiable basis on which to bring any additional charges against Nazanin Zaghari-Ratcliffe,” a Foreign Office spokesperson said.

In a statement over the weekend, the Judiciary of the Islamic Republic of Iran said: “[Johnson’s] statement shows that Nazanin had visited the country for anything but a holiday. For months it was claimed that Nazanin is a British-Iranian charity worker who went to see her family when she was arrested.

“‘She was simply going on holiday, making a routine visit with her daughter Gabriella to visit her parents living in Tehran,’ the Guardian falsely claimed. Mr. Johnson’s statement has shed a new light on the realities about Nazanin, which has been strongly denied previously by both her family and human-rights activists,” the Iranian judiciary concluded.

I have written to Boris Johnson in the strongest terms. He MUST correct what he said about Nazanin Zaghari-Ratcliffe https://t.co/rx6AJf4AM9

A serious blunder by @BorisJohnson that could have dire ramifications for Nazanin Ratcliffe, British mum held in an Iranian jail. He said she was ‘training journalists in Iran’. She was not, and was actually on holiday. Statement from Thomson Reuters Foundation: @foreignofficepic.twitter.com/BhmX2dZWSM

Zaghari-Ratcliffe is a dual British-Iranian national who was first arrested in April last year for leading a “soft coup” against the state.

On Saturday, she faced Abolghassem Salavati, a notoriously harsh judge who sentenced her in the first trial. Salavati was placed on the EU sanctions list in 2011 for “gross human rights violations.”

Last month, a letter sent to Zaghari-Ratcliffe by former PM David Cameron was intercepted by the Iranian authorities. Iranian prosecutor Abbas Jafari Dolatabadi said the letter demonstrated Zaghari-Ratcliffe’s importance to the British authorities, but he did not say when it was sent or provide any other details about it.