Boris Johnson failed to answer questions on Saudi Arabia’s alleged links to the Islamist militia battling the Syrian government in Eastern Ghouta. The interview came after a UN-agreed temporary ceasefire was put in place.

Presenter Mishal Husain for BBC Radio 4’s Today program pushed the foreign secretary on reports that British ally Saudi Arabia was “backing” the main militant group in the area. Husain asked: “The Saudis are reportedly backing the most prominent rebel group in Ghouta, Jaish al Islam. Have you talked to the Saudis about that?”

“We certainly do and one of the tragedies of this whole conflict as you will remember…,” Johnson said, before aborting any attempted explanation and simply adding: “To be fair I don’t think the Saudis would concede that they’re involved in military action.”

After Husain pressed on, asking him once more about the links, Johnson responded: “Many people are reported to back all sorts of groups, we don’t believe the Saudis are on the ground in Eastern Ghouta. To throw the blame on the Saudis when the overwhelming bulk of the killing has been done by the Assad regime. The 400,000 people who have died in Syria, we think about 80 percent, if not more, have been at the hands of the regime.” 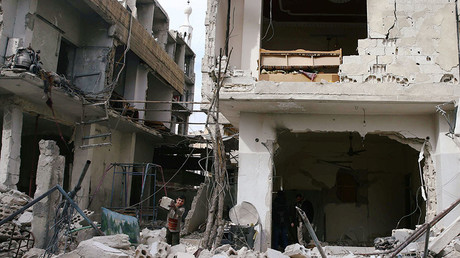 Husain, however, continued to ask about whether or not Britain should use its influence with the Gulf kingdom to stop the arming of rebels. She asked: “I am merely saying you are talking about relationships… I am wondering where we can use our influence.

“All sorts of people have been supporting all sorts of interests in Syria,” Johnson replied. “There is no question that the overwhelming bulk of the killing has been done by Assad with the support and the connivance of the Russians.”

Also in the interview, Johnson stated that the UK would consider airstrikes against the Syrian government if there were evidence chemical weapons are being used against civilians. The announcement is in apparent contradiction with current UK foreign policy.

Though Johnson said he wanted to be “absolutely clear” the UK would not intervene with an invasion of the country at this time, he did add that Britain cannot allow chemical weapons use to go “unpunished.”

Johnson reiterated his support for US President Donald Trump’s decision in April 2017 to bomb an airfield after, chemical weapons were reportedly used in Khan Shaykhun. The UK – invariably alongside the US – has a long history of military interventions in the Middle East and Africa, in nations such as Libya, Iraq and Syria itself.

The UK has been bombing Islamic State (IS, formerly ISIS) targets in Iraq since 2014 and in Syria since 2015 after Parliament voted in favor of airstrikes. On Sunday, the United Nations Security Council backed a resolution for a month-long ceasefire in the embattled region. Russian President Vladimir Putin called for a daily five-hour “humanitarian pause.”