UK Foreign Secretary Boris Johnson pushed for continued arms sales to Saudi Arabia in the wake of a deadly airstrike on a funeral in Yemen which killed 140 people, it has been revealed.

In a letter to UK secretary of State for International Trade Liam Fox, published by the Guardian and dated November 8, Johnson wrote: “I am aware you have deferred a decision on four export licence applications to supply the Royal Saudi Air Force with equipment which could be used in the conflict in Yemen.”

He advised Fox to proceed with the arms sales. “The issue is extremely finely balanced, but I judge at present the Saudis appear committed both to improving processes and to taking action to address failures/individual incidents.”

He went on to say “the clear risk threshold for refusal … has not yet been reached.”

Fox then recommended the licences be approved in light of the assessment provided by Johnson.

In his reply to Johnson, he warned of inherent risks because of the “grave situation” in Yemen and other reasons which were redacted.

“I agree that this is an extremely complex situation and that the issue of clear risk is extremely finely balanced. In the light of your assessment and [REDACTED] recent advice I accept that we should continue, for the present, to assess export licences for Saudi Arabia on a case-by-case basis,” Fox wrote. 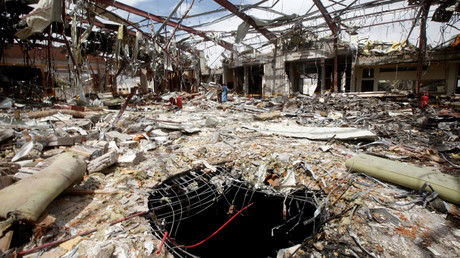 However, he added that, “In doing so I want to be very clear with you about the risks inherent in making this decision, not just because of the grave situation in Yemen.”

On October 8, the funeral of the father of a prominent Houthi leader was attacked in the Yemeni capital, Sanaa, killing 140 people and injuring 534. Witnesses say nothing was left at the site but “a lake of blood.”

The Saudi-led Arab coalition, which has been attacking Houthi rebels since early 2015, initially denied its involvement but later agreed to investigate the attack.

The inquiry team found: “Because of non-compliance with coalition rules of engagement and procedures, and the issuing of incorrect information, a coalition aircraft wrongly targeted the location, resulting in civilian deaths and injuries.”

The letters between Johnson and Fox were among documents disclosed in court proceedings this week, as the Campaign Against the Arms Trade (CAAT) faced the government in a judicial review of the decision to continue licensing arms exports to Saudi Arabia despite the kingdom’s widely criticized offensive in Yemen.

In the landmark case at the High Court, CAAT and other campaign groups are arguing British arms exports are not compatible with UK and EU legislation because they have been used to illegally kill Yemeni civilians.

The four-day judicial review ends in the closed court on Friday.

In November, the government rejected calls by two parliamentary committees and human rights groups to stop selling arms to Saudi Arabia, arguing that the weapons were not being used in “a serious violation of international humanitarian law.”

Britain has come under frequent criticism for continuing to supply arms to Saudi Arabia in the face of repeated atrocities in Yemen. The UK has made more than £3 billion ($3.6 billion) from arms sales since the military campaign began in March 2015, which has seen 11,000 Yemeni civilians killed.

Britain has supplied fighter jets, bombs and missiles to Saudi Arabia, and provided training to Saudi pilots participating in the war. It has also admitted to exporting 500 cluster bombs to Saudi Arabia in the 1980s.