Boris Johnson challenged Theresa May to sack him due to his growing discontent over the PM’s plans for Brexit, as he has no plans of quitting, The Times reports, adding to recent social media tensions between Tory backbenchers.

It’s the first time Johnson has publicly criticized PM May over her Brexit plans, which risks bringing out into the open a split in the cabinet. A slight majority were said to be against the PM’s supposed favored option of a “customs partnership” in a meeting last week, The Independent reports. 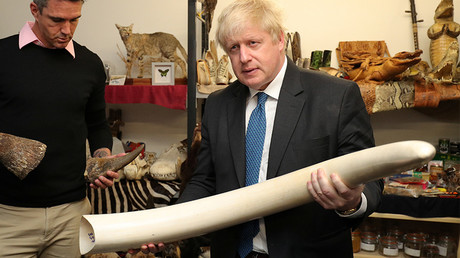 The foreign secretary returned from his recent visit to the US, which included an appearance on the conservative TV show Fox and Friends, to face Theresa May at the cabinet table yesterday. He no doubt had to explain comments he made to the Daily Mail, in which he characterized the customs partnership as “a crazy system whereby you end up collecting the tariffs on behalf of the EU at the UK frontier.”

It follows a period of open discontent on social media from Tory ‘remain’ backbenchers – such as Nicholas Soames, grandson of Winston Churchill – towards hardline Brexiteers. Soames told Jacob Rees-Mogg and his European Research Group (ERG) on Twitter to stop holding Theresa May and the “pragmatic centre” to “ransom” over their demands for the Britain’s Brexit plans.

Gary Streeter, MP for South West Devon, said that a period of silence from Rees-Mogg would be welcomed by “us in the loyal mainstream.”

Many of us want this holding to ransom of The PM and the pragmatic centre of the Party and Public opinion by ERG and it’s supporters including @Jacob_Rees_Mogg to end ,and for the best Brexit for U.K. to be negotiated #itsgottostop

Dominic Grieve MP, an ardent Tory ‘remainer,’ told BBC Radio 4’s World at One that Johnson’s comments regarding the customs partnership were “regrettable,” but that he could understand why the prime minister was putting up with such “outbursts” from the foreign secretary.

The MP for Beaconsfield said “I don’t think he is in any way inhibited by normal propriety in government. I can well understand that seeing the difficult issues that we are having to confront, which are very divisive, the prime minister should accept these rather extraordinary bursts of misbehaviour by Boris.”

Theresa May, Chancellor of the Exchequer Philip Hammond, Business Secretary Greg Clark, and Northern Ireland Secretary Karen Bradley are said to back the PM’s customs partnership plan. However, May looks to have a major job on her hands establishing a united cabinet front – especially in light of ‘remainer’ Amber Rudd’s resignation – and convincing ministers like Johnson, Javid, Williamson, and Gove of her preferred option.

Otherwise, it may not just be her Brexit plans being questioned; her status as Tory leader could also face increased scrutiny.