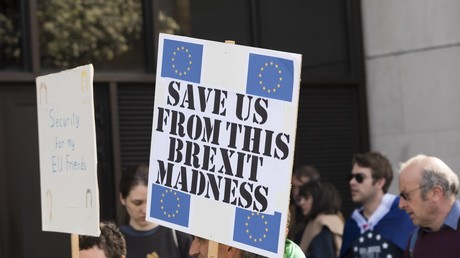 Boris Johnson’s landmark Valentine’s Day Brexit speech has been widely derided by the Twitterati. Despite the foreign secretary seeking to reconcile with Remainers, his speech was dismissed for his perceived “double standards.”

Johnson attempted to paint an optimistic future for Brexit Britain, talking up the supposed economic benefits while dismissing the idea of holding a second referendum on the final EU-UK deal.

Labour MP David Lammy branded the speech a “waste of time,” while cautioning against having a person such as Johnson in government.

What a waste of time that speech was Boris. We’ve heard it all before. A few bad jokes, a few long words. No detail on Northern Ireland, no detail on EU relationship, no detail on anything. Government cannot just be an unsubstantiated assertion followed by a ruffle of one’s hair.

Labour MP Peter Kyle weighed in, posting: “This speech from Boris Johnson is indistinguishable from his before the referendum: a bland and generic wishlist, grotesquely exaggerated assertions, all predicated on nationalist sentiment and colonial sentimentality. Backward-looking clap-trap.”

The one-time Tory leadership hopeful stirred further outcry when he suggested people in the UK are clueless about the internal workings of the EU.

During his speech, the Tory MP stated once again that the UK should not go through another EU referendum.

“[…] if there were to be a second vote I believe that we would simply have another year of wrangling and turmoil and feuding in which the whole country would lose,” Johnson said.

This prompted the response of renowned actor and writer David Schneider, who tweeted:

Boris Johnson makes speech saying he is convinced that reversing Brexit would be an absolute betrayal. As is traditional, he has also written a speech saying the opposite.

Johnson also singled out the economic situation of a post-Brexit Britain as one of the main concerns of the public.

He sought to quell any worries by saying that the UK will have more money to spend once it effectively withdraws from the bloc in 2019.

Meanwhile, Huffington Post political editor Owen Bennett pointed out what he saw as the hypocrisy of Britain’s foreign secretary: