Foreign Secretary Boris Johnson reportedly asked Iran to free two British “spies” during his recent trip to the country. Their names have not been disclosed.

Speaking to the Tasnim News Agency in Tehran, Iranian MP Hossein Naqavi Hosseini said that Johnson had made the request. He added: “One of the problems that we face in receiving European delegations is that they make irrational requests from the Iranian side.”

Naqavi Hosseini, who is the spokesperson for the Iranian parliament’s National Security and Foreign Policy Commission, said some requests made by delegations traveling to Iran are regarded as an interference in its internal affairs. He stressed that Johnson had not raised the issue with the commission, but if he had, it would oppose the request. 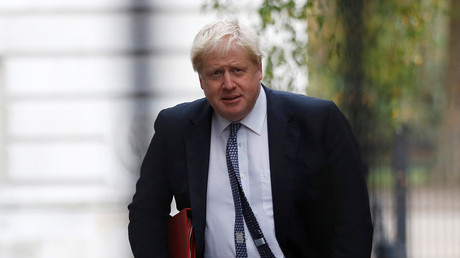 Johnson made an official trip to Iran over the weekend as part of efforts to improve Tehran-London relations as Britain prepares to leave the EU. During the bilateral meetings, Johnson said he had raised “complex consular cases” with President Hassan Rouhani.

The foreign secretary was also there to push for the release of jailed British mother Nazanin Zaghari-Ratcliffe. He hinted on Monday that she could soon be freed following his visit.

Zaghari-Ratcliffe was expected to have five years added to her sentence after Johnson erroneously declared in parliament that she was teaching journalism in Iran.

She is serving a jail term for “spreading propaganda” and being a “spy.” The Ratcliffes have always maintained that the former Thomson Reuters Foundation employee was on a family holiday at the time of her arrest. It is not known whether the “spies” referred to by Naqavi Hosseini include Zaghari-Ratcliffe.

Speaking in the House of Commons on Monday, Johnson said he didn’t want to give “false hope” about the fate of the British mother-of-one, but said talks had gone well. “I was frank about the subjects where our countries have differences of interest and approach. But our talks were constructive nonetheless,” he said.

“While it is not in the interests of individuals to provide a running commentary, the house can be assured the government will leave no stone unturned to secure their release,” he added.

Johnson was quizzed by MPs on the impact that his speech had on Zaghari-Ratcliffe’s case after officials in Tehran said Johnson had revealed the truth. He insisted that Tehran had told him it had no bearing on her case.
Zaghari-Ratcliffe, 39, is said to be struggling with mental-health issues and has been jailed for almost two years. During Johnson’s visit on Sunday, Zaghari-Ratcliffe’s court hearing, which could have led to a doubling of her five-year sentence, was delayed.

Johnson has faced calls to stand down over the damage he caused to her case. The foreign secretary met with Zaghari-Ratcliffe’s husband, Richard Ratcliffe, in November to discuss calls for her to be provided with diplomatic protection. Ratcliffe said he had wanted to accompany Johnson, but the Foreign Office felt his presence would be “too political.”