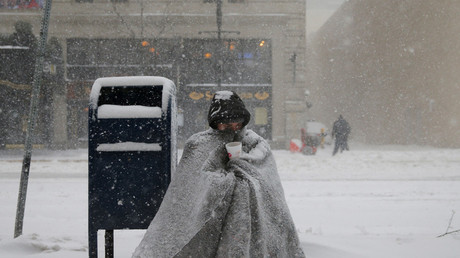 Having already faced two weeks of record smashing cold weather, things are set to get even worse for the east coast of the United States.

New England will be blasted with a so-called ‘bomb’ cyclone on Thursday, which is forecast to bring freezing winds and blinding snow across the north before sweeping frigid air along the entire eastern seaboard.

All day Thursday meteorologists are going to be glued to the new GOES-East satellite watching a truly amazing extratopical “bomb” cyclone off New England coast. It will be massive — fill up entire Western Atlantic off U.S. East Coast. Pressure as low as Sandy & hurricane winds pic.twitter.com/6M4S3y75wT

Meteorologists are saying it could be the most severe winter storm to hit the area in decades. The country is already in the grips of a vicious cold snap that has seen century-old records broken in many areas. The extreme weather has been blamed for the deaths of nine people.

Even warmer parts of Florida and Georgia, which are unaccustomed to snow, won’t be safe from the cyclone as the National weather service has issued a series of wind chill and freeze warnings. The warnings say that sub-freezing temperatures are imminent in northern Florida and southern Georgia.

Computer models are projecting a serious intensification of the cyclone as it hits the country with a force seen only with a hurricane.

The strength of the storm will cause it to suck in frigid Arctic air which it will then blast across the east coast. Out at sea it will create enormous waves and, when it makes landfall, the ‘bomb’ will be powerful enough to tear down trees and create dangerous blizzard conditions.

Thankfully, the core of the biggest waves likely stay well out over the Western Atlantic. Still these are decent onshore waves and may go a bit bigger in the end. Will be interesting with all the ice near the shores. pic.twitter.com/jG3j5CriGK

“Our biggest concern is the potential for damaging wind gusts, especially near the southeast New England coast,” the Boston branch of the National Weather Service said on Twitter. “Power outage risk followed by arctic air Fri/Sat a big concern!”

Even in the first 12/28 entry offered, regardless of where this storm tracks, it was quite evident that EVERYTHING pours in behind it. Siberia, North Pole, Greenland. Everything. Severe cold snap behind this storm. Think power may go? Start planning… pic.twitter.com/ye85dPHjcW

After ‘exploding’ in the north, the cyclone will then sweep south blasting the country with the most intense weather of the recent cold spell. In an almost unprecedented occurrence, weather advisories have been issued all along the coast from Florida to Massachusetts.

The one silver lining from the impending barrage is that temperatures will improve early next week.