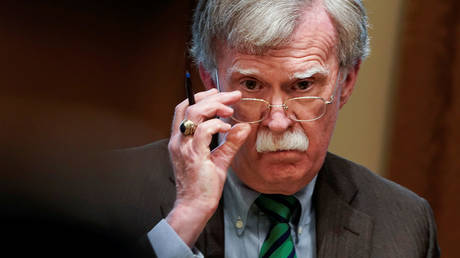 In a speech full of colorful phrases, from ’three stooges of socialism’ to ‘troika of tyranny,’ US national security adviser John Bolton threatened Cuba, Venezuela and Nicaragua with regime change and announced more sanctions.

“The United States looks forward to watching each corner of this sordid triangle of terror fall: in Havana, in Caracas and in Managua,” the regime-change enthusiast said in Miami, Florida on Wednesday, the 58th anniversary of the failed CIA-sponsored Bay of Pigs invasion of Cuba.

Also on rt.com
‘You will fail again, like in the Bay of Pigs’: Cuban officials rebuff new US sanctions


That effort by Washington to stop the Cuban revolution in its “backyard” – a term it often uses in reference to countries south of its border – failed spectacularly. The latest regime change efforts in Venezuela aren’t exactly going to plan, either.

Despite the support from Washington, self-proclaimed president Juan Guaido has failed to win over Venezuela’s military, and President Nicolas Maduro remains in power in Caracas. With the US unwilling or unable to actually send in the troops, sanctions and threats are all Washington has left – and Bolton issued plenty of both on Wednesday.

The hawkish adviser trumpeted the latest US move against Cuba: a $1,000-per-quarter cap on money transfers from US residents to their Cuban relatives and associates, as well as additional sanctions and restrictions on tourism. Bolton also announced sanctions on the Central Bank of Venezuela and Bancorp, which he called a “slush fund” for Nicaraguan president Daniel Ortega.

“The troika of tyranny – Cuba, Venezuela and Nicaragua – is beginning to crumble,” Bolton told the audience. Clearly in the mood for nicknames, Bolton went on to dub the leaders of those – Miguel Diaz-Canel, Maduro and Ortega –  “the three stooges of socialism.”

“We don’t throw dictators lifelines,” he continued. Ironically, Bolton had no problem throwing lifelines to US-backed death squads in Nicaragua in the 1980s, when as assistant attorney general for congressional affairs he refused to turn over documents relating to the Iran/Contra scandal to Congress.

Bolton also said that the sanctions on Cuba are intended to scare “external actors” like Russia away from intervening in Venezuela – though according to him, US meddling in Venezuela’s internal affairs was perfectly fine and even desirable.


Wednesday’s speech wasn’t the first time that Washington has warned foreign powers to stay out of “our hemisphere,” and Bolton was sure to remind listeners of that.

“Today, we proudly proclaim for all to hear: the Monroe Doctrine is alive and well,” Bolton said, referring to a policy first outlined by President James Monroe in 1823, warning European powers from meddling in the Western hemisphere.

Since then, it has been invoked by John F. Kennedy and Ronald Reagan to justify US meddling, support for dictatorships, and military interventions in Latin America, from Mexico to Chile.