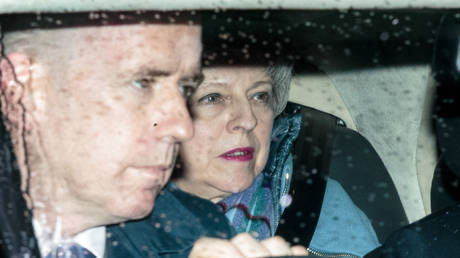 Less than two hours after landing in Brussels, Theresa May’s convoy was set upon by an anti-Brexit protester who rushed the motorcade as it pulled up outside the headquarters of the European Commission.

Demonstrator Mark Johnston was one of several participants in the “Bollocks to Brexit” protest which greeted the embattled British prime minister as she arrived for yet more negotiations with the EU regarding Britain’s impending divorce from the union.

“Are you willing to get run over for Brexit?” a reporter asked Johnston after a short scuffle with security.

“I’d rather the prime minister not crash out,” Johnston wryly responds, in reference to the placard he brandished at May’s passing vehicle.

May is hoping to secure concessions from the EU regarding the Irish backstop issue which has repeatedly scuppered negotiations, and threatened her leadership on several occasions.


The UK’s parliament is expected to vote, once again, on whatever the latest draft deal may be on February 14.

“There are three or four of them, actually. You can still see them just over here gathering with yellow hats on which say ‘something to Brexit’, the B word. I’ll let you guess what that is,” Sky News Europe correspondent Mark Stone said, describing the scene.

“I don’t know if it actually was her car to try and stop it and pretty quickly some plain clothes Belgian security officers moved him out of the way and the car then went in.”