Tony Blair, one of the chief architects of the Iraq War, seems to be backing another military intervention in the Middle East, as he said Theresa May needs no parliamentary backing to launch airstrikes on Syria.

Proving that old habits die hard, the former Labour prime minister encouraged the UK to “be alongside” the US in future military action. President Donald Trump is widely expected to announce a military response in Syria, following allegations of a chemical weapons attack on the formerly rebel-held town of Douma.

NATO has pinned the blame on Syrian leader Bashar Assad. Syria and Russia, one of its main allies, vehemently deny the allegations and say there is no evidence to suggest a chemical attack in the Eastern Ghouta area took place. Russian Foreign Minister Sergey Lavrov called for an “honest investigation,” but opposed apportioning blame without any proof. 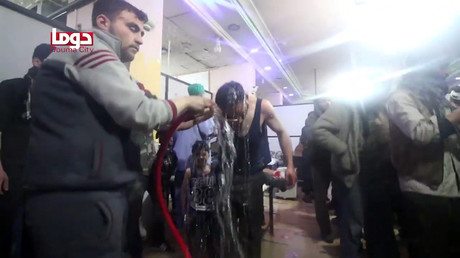 Blair gave the green light for the UK, led by the US, to invade Iraq in 2003 on what turned out to be unfounded intelligence that Saddam Hussein had weapons of mass destruction. Half a million people lost their lives in the Iraq War, including 179 British servicemen and women, according to a study by US, Canadian and Iraqi university researchers. The former PM has faced calls to be charged for war crimes.

“I think in circumstances where the action presumably would be a form of air action rather than ground force action, I don’t think strictly [parliamentary approval] is necessary,” Blair told Radio 4’s Today program. He added: “If the US are taking action, we should be prepared to be alongside them…

“If the Americans are prepared to act and are going to act fast, I think ourselves – and probably the French government will be in the same position – should be supportive.

“Because it’s important that when chemical weapons are used in this way and the international community has taken a firm position against it, that you have to enforce it.”

He added that failure to act would be giving “carte blanche to the [Syrian] regime to do whatever is necessary to retake opposition areas by force.”

Current UK Prime Minister Theresa May did not rule out joining international military action against Assad, but stopped short of specifying what range of options may be available to the government.

It comes after US leader Donald Trump promised a “forceful” response to the alleged poisoning of civilians in Eastern Ghouta on Saturday. Up to 70 people are reported to have been killed in the alleged attack, which was initially reported by humanitarian aid group the White Helmets, an organization that has faced accusations of being linked to Islamist extremists.