During his time as Middle East envoy Tony Blair helped an oil company owned by a Saudi prince lobby Chinese leaders in exchange for £41,000 a month and a 2 percent commission on any contracts he helped clinch, documents reveal.

In November 2010, Blair’s company Tony Blair Associates signed a contract with PetroSaudi which stipulated that the ex-prime minister introduce the oil firm’s representatives to senior Chinese officials, a series of leaked emails seen by the Guardian has shown. 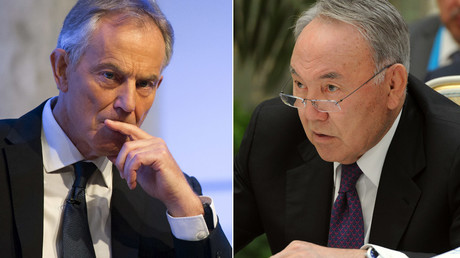 The emails indicate that PetroSaudi, which is co-owned by Prince Turki bin Abdullah, the son of the late King Abdullah, encouraged Blair to “help deliver transactions, not just make the intros.” However, this proved impossible because under UK financial regulation only “approved” persons are allowed to arrange administer or advise on investment.

A later email from PetroSaudi cited concerns that the Financial Services Authority (FSA) may be targeting Blair because of his work for the oil firm.

The email read: “Certain people at the FSA (Financial Services Authority) are out to get him… TB will assist in delivering transactions but cannot have it on paper that this might be the case (which no doubt still causes potential problems with the FSA).”

Over the next two-and-a-half years, Blair made ten trips to China during which he personally lobbied then head of the China Investment Corporation and current finance minister Lou Jiwei.

The former prime minister eventually obtained a “blessing” from the Chinese leaders granting PetroSaudi entrance into the Chinese market.

As part of Blair’s employment, PetroSaudi was allegedly told not to disclose details of his role without permission.

The Guardian notes however that they have not seen any evidence of wrongdoing on the parts of Blair or PetroSaudi.

“His role was made known to the regulators … and he has never undertaken any activity other than making introductions. He does not do ‘deals,” a spokesman for Blair told the paper.

“The work Tony Blair Associates did for PetroSaudi International Ltd, which is based in the UK, was undertaken five years ago for a limited period of a few months and was completely unrelated to the Middle East.

“It is ludicrous to suggest that we would use PetroSaudi for anything related to Quartet work, and our contract with them clearly stipulated that this could not occur.

“Also, as we have said on previous occasions, neither TBA nor Mr. Blair has arranged any meetings with any British minister for PetroSaudi or for any other clients.”