Protesters against police brutality turned violent themselves and attacked security officers outside Portland City Hall. Footage shows a guard being repeatedly beaten on the head with a megaphone.

The group of protesters stormed City Hall on Wednesday to express outrage after officers injured multiple people on Saturday, when Antifa demonstrators stormed a gathering by the right-wing Patriot Prayer.

Footage of Wednesday’s protesters shows activists rallying at the building and chanting “shame” to authorities.

A masked man can be seen targeting one of the security staff as he repeatedly slams a megaphone on his head. According to police, another City Hall officer was assaulted but added the security staff did not suffer injuries that required hospital treatment.

No arrests in connection with the assault on the guards have been made.

Two people, including Diane Keeauver, 67, were arrested on charges of trespassing, police added. The other person, yet to be identified, was carried out of City Hall by their arms are legs, Oregon Live cited a police spokesman saying.

Police say they were called to Portland City Hall at 11am on Wednesday August 8 after reports protesters had violated its rules and had refused to leave the premises when asked to by security guards. 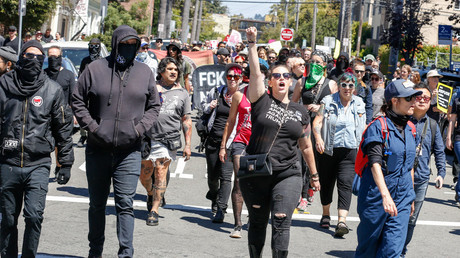 Officers found demonstrators on the third floor, with two of them lying on the floor. The protesters were warned they would be arrested for trespassing if they did not leave. The two lying down were taken into custody as they did not budge.

Police found more protesters at the main level of City Hall and near the east entrance of the building. As the group were ordered and directed out of the building, the two City Hall security guards were assaulted, police say. A man also smashed a glass jar to the ground.

Some of those taking part in the protest were the very same ones who had been injured by police at the protest on Saturday, Oregon Live reports.

“I should be home recovering from the pain and trauma I’m suffering. But I’m also suffering from complete outrage and powerlessness,” said Michelle Fawcett, who lives in Portland, the local paper reports.

Fawcett claims she was left with severe soft tissue injuries and third-degree chemical burns to her arm and chest after being struck by a “flash-bang” stun grenade deployed by police at Saturday’s rally in the centre of Portland.

Black-clad demonstrators wearing masks threw projectiles at police, who responded with flash grenades. Portland police chief Danielle Outlaw announced an inquiry by the Office of Independent Police Review into the police’s use of less-than-lethal weapons.

Outlaw said the inquiry would “determine if force was used and if so, was within our policy and training guidelines”.