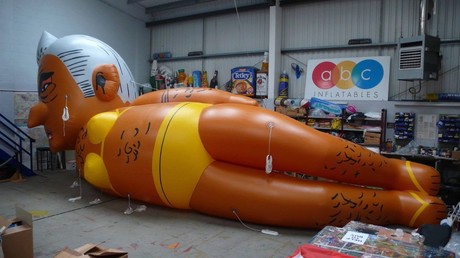 A self-proclaimed “free-speech activist” has raised nearly £60,000 ($78,100) for a plan to fly an enormous blimp depicting a bikini-clad London Mayor Sadiq Khan over Westminster this weekend.

Yanny Bruere crowdfunded the sum as part of an ongoing bid to remove the mayor from office over what Bruere believes is his inability to get to grips with gang and knife crime in the city. According to the crowdfunding page, a number of the purported donations have come from anonymous donors.

“Under Sadiq Khan, we have seen crime skyrocket to unprecedented levels. People in London don’t feel safe and they aren’t safe,” Bruere posted on Twitter.

The blimp, which shows an angry-looking Khan character in a two-piece bikini, is in the same satirical mold as the Trump baby balloon that was flown over the streets of London during US President Donald Trump’s state visit to the UK in July. At 29ft, the inflatable mayor is larger than the Trump balloon.

According to the Metropolitan Police, some 87 people have been murdered in London so far this year. Assistant Commissioner Martin Hewitt told the London Knife Crime Summit in July that officers are routinely seeing victims with multiple stab wounds.