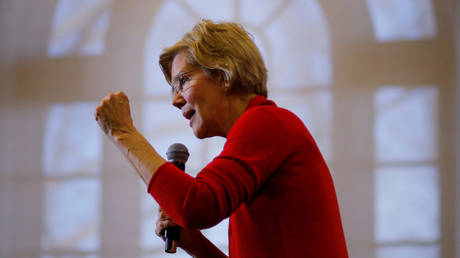 Presidential hopeful Elizabeth Warren has unveiled plans to break up and regulate Amazon, Google, and Facebook. The Massachusetts Senator’s anti-monopoly stance aligns her with both Bernie Sanders and Donald Trump.

Warren said she would “unwind tech mergers that illegally undermine competition,” and introduce legislation that would bar platforms from both offering a marketplace and selling their own services on that same marketplace.

Facebook, Amazon, and Google have vast power over our economy and democracy. They’ve bulldozed competition and tilted the playing field in their favor. Time to break up these companies so they don’t have so much power over everyone else. #BreakUpBigTechhttps://t.co/2rWT0wJ8vD

The plan would directly target Facebook’s acquisition of WhatsApp and Instagram, as well as Amazon’s takeover of Whole Foods and Google’s absorption of mapping company Waze and ad firm DoubleClick.

It would also split companies into two tiers. Those with an annual revenue of $25 billion or more would be legally forced to separate their goods from their marketplace services, while those earning less would face less stringent regulation. Companies would also be barred from sharing user data with third parties.

Warren’s plan was well received by her supporters on the left. Some suggested that she go after the ‘too big to fail’ banks for good measure.

She won that fight. Institutions were forced to pay $12B to people they cheated.

The “Warren can’t beat Trump” logic is utter nonsense. Nobody is better at beating up plutocrat scumbags.

Using regulatory power to break up monopolies is not a radical idea. Antitrust laws were used to break up oil tycoon John D. Rockefeller’s Standard Oil and J.B. Duke’s American Tobacco Company in 1911. More recently, Microsoft was sued in the 1990s for making it difficult for users to uninstall its bundled Internet Explorer web browser, a move the Justice Department called anti-competitive.

The growing dominance of a handful of Silicon Valley tech giants has reignited talk of monopoly-busting. Almost half of all e-commerce goes through Amazon, while more than 70 percent of all internet traffic goes through sites owned by Google or Facebook, Warren’s statement claims.

With some calling the firms’ monolithic power “the death of the web,” calls for regulation have come from both the left and the right in America.


Sen. Bernie Sanders (I-Vermont), a 2020 candidate and progressive bedfellow of Warren, has stated that Amazon is “too big” and called on the government to “take a look at the power and influence that Amazon has.”

On the other side of the political spectrum, President Trump has been a savage critic of Amazon and its owner Jeff Bezos. Trump said last year that he was “looking at” deploying antitrust laws to break up Amazon, Google, and Facebook. Republicans have also railed on Google and Facebook for their perceived liberal bias.

….In my opinion the Washington Post is nothing more than an expensive (the paper loses a fortune) lobbyist for Amazon. Is it used as protection against antitrust claims which many feel should be brought?

“I want a government that makes sure everybody — even the biggest and most powerful companies in America — plays by the rules,” Warren said on Friday. “We need to stop this generation of big tech companies from throwing around their political power to shape the rules in their favor and throwing around their economic power to snuff out or buy up every potential competitor.”